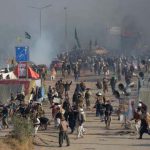 RAWALPINDI: Owing to various factors, journalists who had fallen victim to Tahreek-e-Labaik Pakistan (TLP) workers’ violence and sustained injuries during the 2017 protest sit-in at Faizabad, opted not to file the First Information Report (FIR) against the TLP workers.

Yaseen Hashmi, the then Bureau Chief of a private TV Channel had suffered serious head injury due to the attack of TLP workers at Faizabad.

While talking to this scribe, Hashmi said, he was making video of the TLP workers who attacked the residence of former interior minister Chaudhry Nisar Ali Khan at Faizabad, when some of the violent workers attacked him with iron rods and was hospitalized.

After recovering from injury and discharged from hospital I filed an application with the police station New Town for registration of FIR of the incident however, the police did not logged FIR until now, he maintained.

To a question, Hashmi said, the senior journalists including office bearers of the National Press Club and Journalists Unions were present at the moment while the TLP workers were beating him, however none of them tried to rescue him, adding that after the incident union did not helped him in logging FIR nor in medical treatment.

The physical assault continued to be a chronic problem for Pakistani journalists. According to the PPF research, during 2018 there were at least 22 cases of physical assault in which five journalists were injured while 25 others were beaten and manhandled to stop them from performing their professional duties in different cities of Pakistan.

Parvaiz Aasi, another victim of violence by the TLP workers, said that he opted not to file FIR because nominating TLP in FIR could cause more problems for him. He said that he had already survived an attack on him in his office. He noted that the journalists’ union did not played any role nor helped him in the incident. These factors forced me not to file FIR of the unfortunate incident, he revealed.

Abdul Lateef Qadri, Tahreek e Labaik (TLP) Spokesperson for Rawalpindi Division, said that any political leadership never ask the workers to attack journalists. “During the Faizabad sit-in when the security forces started the operation against TLP workers if any journalist is injured during that operation we are unaware of them”, he added.

Senior Journalist Gulzar Khan said, attacks, threats and illegal detention is now a routine matter for the journalists especially reporter. Journalists avoid filing FIR of every incident because it disturbs their professional life. After FIR a journalist has to appear in the court and in inquiries, if they starts reporting every incident they will not do anything else except appearing in the court and inquiries, he said.

Jamil Mirza, Finance Secretary of Pakistan Federal Union of Journalists (PFUJ), said that the body arrange training workshops to guide the journalists about the safety measurement while performing their duties but unfortunately, sometimes the journalists especially photographers and cameramen in the run for exclusive footage cross the red line while covering any an incident which cost them injuries.

The report “State of Pakistani Media in 2018” by Pakistan Press Foundation (PPF) lists the country as one of the most dangerous countries in the world for media persons. Pakistan has witnessed the killing of 72 journalists since 2002. Except five cases, the remaining deaths remain unresolved and perpetrators remain unpunished. Successive governments were found reluctant to probe the murders of journalists.

According to the US based Committee to Protect Journalists (CPJ), Pakistan witnessed the highest number of journalists’ murder as compare to the neighboring countries, 50 journalists had been killed in India since 1992, 48 in Afghanistan and 21 were killed in Bangladesh.

Joint Secretary of the National Press Club Nadeem Chaudhry said, such incidents are related to the union of journalists, and they did efforts to ensure safety of the journalists.

Answering a question about the procedure of interrogation of such cases Sohail Zafar said that police collects information, photos, and videos from different sources including media persons, security agencies and others to nab the suspects.

Pakistan Tahreek-e-Insaf Lawmaker, Seemabia Tahir said that she had tabled a resolution three months ago in Punjab Assembly regarding the safety of journalists especially field staff reporters and cameramen.

She expressed astonishment on non-registration of FIR of Faizabad sit-in victim journalists and said that she will take up the issue with the concern authorities.

Federal and Provincial government is doing efforts to make sure the safety of journalists, in this regard journalists safety bill will be tabled soon in National Assembly, she maintained.

It is pertinent to mention that seven journalists covering the sit-in of Tahreek Labaik, were injured when the protestors attacked them and security officials on November 25, 2017 at Faizabad Rawalpindi. Those who were injured included Yaseen Hashmi, Qamar Munawar, Sadam Mangat, Tanveer Shahzad, Pervaiz Aasi, Sultan Shah and Shiraz Gardezi.