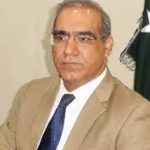 KARACHI   –  Sindh Information Secretary Rafiq Ahmed Buriro said on Tuesday that every step was being taken to improve laws related to welfare of media, particularly journalists, with a view to provide conducive atmosphere for their sustained growth.

The information secretary said that journalists play a pivotal role not only in highlighting grievances of masses but also keeping an eye on the steps of the government. They often face hardships and unfavorable circumstances while performing their duties, he observed. He said that keeping in view their problems, the government was attaching top priority to favorable legislation for them. Proposal for establishment of endowment fund and Journalists Protection Bill for their safety and security were aimed at the same, he opined. The meeting thoroughly discussed and examined the draft of the Bill and participants gave their input to make the Bill more effective. While appreciating their active participation, the information secretary said that the draft would be amended accordingly and further discussed in the next meeting.