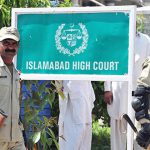 ISLAMABAD: A petition has been filed in the Islamabad High Court against what it described as media censorship and taking off air private television channels giving time to opposition politicians.

Advocate Mir Aurangzeb cited in his petition the information and broadcasting secretary and the Pakistan Electronic Media Regulatory Authority (Pemra) as respondents. The petition said: “There is unrest in society during these days and the media is raising a hue and cry for being pressed by the respondents. It is complained that the respondents are not permitting the media to publish or telecast impartial news and press conferences of the opposition leaders.”

Citing prominent journalist Hamid Mir’s column, the petition pointed out that the “media is being censored in the country and TV channels are also being closed”. Likewise, referring to anchorperson Shahzaib Khanzada’s programme, it claimed that the government had restrained the media from covering the rallies of some opposition leaders.

Moreover, it added, “the respondents have imposed censorship in the name of press advice and are also trying to pressurise the media through establishment of media courts”. According to the petition, TV channels like Geo and Channel 24 had either been taken off air or pushed to last numbers in order to penalise them for giving time to the opposition leaders.

The petition claimed that the respondents were taking punitive measures against TV channels even without issuing them any show-cause notice or giving them opportunity of being heard.

It said citizens could not be deprived of their right to listen to views expressed by the opposition leaders, adding that the respondents were taking discriminatory action against the channels telecasting news about the opposition.

“The action of the respondents are absolutely illegal, unlawful, unconstitutional and against the principles of natural justice,” it argued.

The petitioner requested the court to declare that the respondents had no lawful authority to impose illegal bans or restrictions on the print and electronic media.