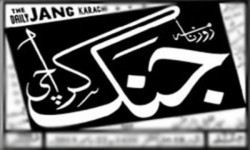 LAHORE: The Human Rights Society of Pakistan under the leadership of its chairman Senator SM Zafar has condemned the vandalism and burning of Jang newspaper vans en route to their destination.

“It amounts to obstructing the right to information and violates our culture, religion and Constitution of Pakistan”. In a statement Tuesday, the HRSP said emotions should not be given the language of violence.

If anyone tries to impose his views on others by taking the law into their hands, he is no different from a terrorist who wants to impose his will through violence, the statement said. It further added that such an attitude will breed intolerance and encourage other groups to follow the same course to force the common people of Pakistan to follow and accept his understanding of religion and the norms of society. It has appealed to the government, both federal and provincial to wake up to its responsibility in reversing this trend, otherwise it will be the government which ultimately will suffer the most.