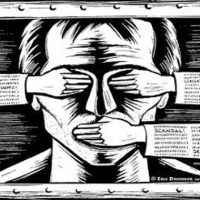 Balochistan has long been a hard place to practise journalism mainly because of a restraining atmosphere for freedom of expression and a restless security situation. However, after recent threats hurled by Baloch militant groups for not giving sufficient space in media, journalist activities and the distribution of newspapers have been suspended and in the entire Baloch region of the province.

Also, journalists, media workers and newspaper vendors have found themselves in an untenable situation because of the multi-dimensional sources of pressure around them.

This was the crux of a discussion organised by the Human Rights Commission of Pakistan (HRCP) at its Karachi office on Saturday to discuss the overall situation regarding the freedom of press in Balochistan.

Asad Iqbal Butt, the HRCP’s vice-chairperson presided over the meeting, in which a number of journalists, civil society and rights activists participated.

Anwar Sajdi, editor of daily Intikhab, a most influential newspaper in the province’s Baloch belt, said it had become very difficult to journalists to work in such an oppressive environment. “On the one side, judiciary, law enforcement agencies and civilian government have been pressuring us not to give converge of activities and statements of proscribed insurgent groups, and on the other side, militant outfits have been threatening and attacking us for not giving space. We are caught between them.”

Sajdi also complained that instead of providing security, law enforcement agencies had been harassing journalists by registering cases against them by declaring them facilitators of banned insurgent groups.

The banned insurgent groups had expressed reservations about the media coverage of their activities and issued an ultimatum to stop the distribution of newspapers by October 24.

Arif Siddiq Baloch, who manages Azadi and Balochistan Express dailies, said that after the ultimatum, the distribution of newspapers in the province’s Baloch areas had completely been suspended. “It is not only journalists this time who are under threat but hawkers have also come under attack. Because of it, the livelihood of more than 10,000 people associated with the newspapers in various forms, such as reporters, subeditors, distributors, hawkers and transporters, has been affected,” he said.

He further stated that the government had also stopped giving advertisements to certain newspapers. Urging the government to respect press freedom in Balochistan, the HRCP’s Butt said journalists in the province faced numerous security threats and this made their work even harder. “Similar to journalists, human rights activists who monitor rights abuses were also killed in Balochistan. The HRCP has lost a number of its active members in the province.”

Butt said the state had managed to stop the flow of information because most media persons and individuals increasingly reverted to self-censorship. Dr Tausif Ahmed Khan, senior academic and journalist, said the state had been doing experiment in Balochistan by curbing the freedom of press. “After it, they will enforce such restrictions in the entire country.” Dr Khan alleged that the recent attack on The News investigative reporter Ahmed Noorani was also part of the state’s efforts to restrain the media freedom.