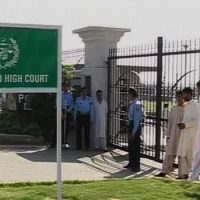 ISLAMABAD: The Islamabad High Court (IHC) has given the federal government a week to implement its order in a case related to the uploading of sacrilegious content on social media.

IHC Justice Shaukat Aziz Siddiqui warned on Friday that in case of non-compliance, the prime minister and other cabinet ministers could be summoned at the next hearing.

“If the same attitude continues [to be] exhibited by the executive, this court [will] issue directions for the personal appearance of the worthy prime minister of Pakistan, ministers for the law, religious affairs and information technology, to face contempt of court proceedings,” read Justice Siddiqui’s order.

The judge added that the “respondents may realise this aspect that in contempt matters, no protection under Article 248 of the Constitution of Islamic Republic of Pakistan is available”.

He recalled that former prime minister Yousaf Raza Gillani had been sent packing over contempt of court.

Justice Siddiqui made these observations as the government failed to submit a compliance report in line with his judgment of March 31, carrying several directions for the government to deal with the proliferation of blasphemous content on social media.

He expressed displeasure when Special Secretary Interior Furqan Buhadur detailed the steps taken by the executive in order to comply with the court’s directions.

The secretary informed the court that Prime Minister Shahid Khaqan Abbasi had constituted a committee consisting of representatives from the ministries of law and justice, information technology, information and broadcasting and interior.

“In my estimation, the essence of all these statements is nothing,” Justice Siddiqui observed.

He added that the non-serious attitude of the executive was evident from the fact that eight and half months had elapsed, but no material steps had been taken to implement the judgment.

“I fail to understand why the executive is dealing with this sensitive issue in routine through bureaucratic and political approach (sic),” he stated, adding that the “issues decided through the judgement have direct bearing on the law and order situation in the country, which may put the country in very serious crisis.”

The judge remarked that the federal government tabled an amendment to retain an ineligible person as the party head overnight, but it was shocking that amendments to discourage the uploading of blasphemous content had been delayed for months.

Subsequently, the court has ordered the special secretary interior to appear with a complete progress report on Dec 22.

In its order, the court had ordered the interior ministry “to identify NGOs operating in Pakistan with an agenda to spread blasphemy and pornography, obviously with the financial assistance of different groups within or outside Pakistan”.

The court had directed the Pakistan Telecommunication Authority (PTA) to evolve some comprehensive and delicate mechanism to identify the pages/websites containing blasphemous contents in order to take some remedial steps with promptitude.

Justice Siddiqui had observed that availability of blasphemous material on social media has a direct bearing on the integrity, security, and defence of Pakistan.

He remarked that all the institutions needed to rise to the occasion in order to protect the ideological and geographical boundaries of the country.

Also, the IHC had ordered the authorities concerned to include sections related to blasphemy and pornography in the cybercrime act.

Justice Siddiqui had also ordered that the top leadership of the country needed to become pro-active on the issue of raising a ‘national firewall’ enabling Pakistan to monitor internet traffic and all users.