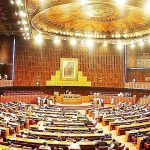 ISLAMABAD: The National Assembly on Monday witnessed a ruckus over the issue of investigation into the murder of a journalist in Sindh as members of the ruling coalition urged NA Speaker Asad Qaiser to order an inquiry into the incident either through a parliamentary committee or a federal agency, while the opposition Pakistan Peoples Party (PPP) opposed the idea, terming it an interference in the provincial authority.

PPP members also raised the issue of killing of six people due to leakage of mysterious gas in Karachi’s Keamari area and questioned the federal government’s silence over the issue, alleging that the maritime affairs ministry was trying to hush up the matter as the gas had leaked from the Karachi Port.

The National Assembly also passed three government bills with a majority vote as the opposition protested against the ruling party for doing legislation in haste and relying on presidential ordinances for it.

The issue of the murder of TV journalist Aziz Memon in Mehrabpur (Sindh) came under discussion in the assembly after reporters covering the proceedings staged a walkout from the Press Gallery.

The minister, while hitting out at the PPP-led Sindh government, condemned the murder and said that Mr Memon had informed the authorities concerned a few days ago about threats to his life, but no timely action had been taken by the police to protect him.

The committee should be constituted to probe the murder of Mr Memon so that those involved in the incident could be brought to justice, she added.

The issue became political when two arch rivals of the PPP — the Grand Demo­cratic Alliance (GDA) and Muttahida Qaumi Movement (MQM) — also condemned the incident and held the Sindh government responsible for the “poor law and order situation in the province”.

PPP leader Raja Pervez Ashraf opposed the call for investigation through a federal agency and criticised the federal government for not appointing the inspector general of police (IGP) in Sindh on the recommendations of Chief Minister Syed Murad Ali Shah. He said the Sindh chief minister had recommended five names for the IGP, but the federal government remained unmoved.

Minister for Inter-Provincial Coordination Dr Fehmida Mirza said that some 200 people had forcefully occupied her land in broad daylight, but the Sindh police merely acted as a spectator.

She also drew the attention of the house to the recent murder of PPP MPA Shahnaz Ansari and supported the human rights minister’s call for formation of either a parliamentary committee or a JIT. She accused the PPP of making the murder of the journalist a political issue by raising the issue of appointment of the IGP.

MQM’s Salahuddin wondered how could a government that failed to protect its own MPA provide protection to journalists. He said the journalist had recorded a video message before his murder which was very important and investigations should be held in the light of that statement.

Science and Technology Minister Fawad Chaudhry said the journalist in his “dying statement” had stated that he had been receiving threats after filing a report about the train march organised by the PPP last year. The minister said the reporter had claimed in his report that the PPP had arranged a “rented crowd”.

Mr Chaudhry said that the journalist in his statement had accused the Sindh government of hurling threats on him and his family. The minister also called for conducting investigations either through parliamentary panel or any federal agency, saying they did not want to make it a political issue.

Mr Ashraf, however, once again took the floor and termed the government’s proposal interference in the provincial matter. He said the PPP also condemned the journalist’s murder for which, according to him, the area police and senior police officials of the province were also responsible.

The speaker ruled that he would make a decision on the demand for the formation of a JIT or parliamentary committee after seeking an opinion from the law ministry.

Later, speaking on a point of order, PPP’s Abdul Qadir Patel said there were reports that six people had died and another 120 were injured due to leakage of some gas in the coastal area of Keamari in Karachi. Without naming, he said one of the federal ministers had stated that the gas leakage was from a wine manufacturing factory. Amid noisy protest by the treasury members, Mr Patel said the minister should apologise to the people of Keamari over his remarks.