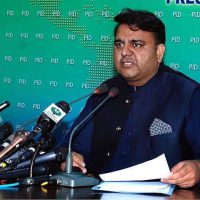 The announcement set alarm bells ringing among stakeholders including journalists who complained that they had not been consulted on the issue and expressed scepticism over the government move that they said could contain media freedom in the country.

While briefing the Senate standing committee on information and broadcasting, Mr Chaudhry said the PTI government would regulate all media and “no one will be able to defame anyone under the new law”.

Amid uneasy gestures by senators, he told the committee that the government was working on a proposal to bring all media regulatory bodies under the proposed PMRA. This would be done by merging all existing rules and acts related to Pakistan Electronic Media Regulatory Authority (Pemra), Press Council of Pakistan (PCP) and Pakistan Telecom­munication Authority (PTA), he said, adding that it would introduce one-window operation to address complaints and other regulatory aspects of the media.

Referring to the proposed law, Information Secretary Shafqat Jalil told the committee that in future electronic media would be allowed to air advertisements only after the approval of the information ministry.

The Express Tribune: New media regulator on the cards

The News: Pemra to be replaced by new authority: Fawad

The Nation: Pemra to be replaced by new authority: Fawad