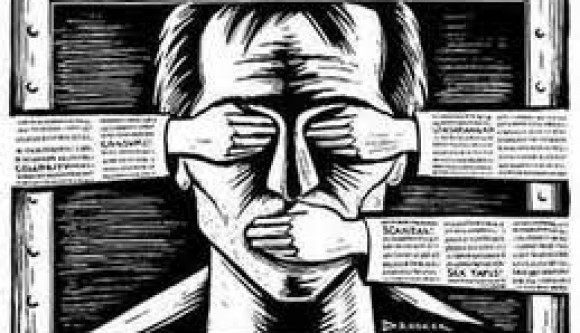 We come into this world crying, and by that we are marked as healthy. We leave it with our last words imparting whatever final wisdom they can to those who matter to us. In those moments, expression is free and fearless. All our lives, the desire to express what we feel even if — sometimes especially if — it flows against the tide of our surroundings, our friends, our family, is palpable; a living thing that beat its wings against the warm but stifling cage of our heart and yearns to burst forth. So often, we swallow it back down. So often, for good reason: to keep our friendships, to avoid hurting our family, to spare the dignity of a stranger we do not know, though we believe his opinions to be dreadfully in error. Not everything that yearns to be free should be at every moment. If you gave voice to every thought that flashed in your brain, your social and professional life expectancy would be measured in hours, not days.

We censor ourselves all the time. There is nothing inherently heroic or cowardly about that, good or ill.

It is a way of negotiating life. But when someone else makes that decision for us, snatches it from us, when the state legislates against our expression, we should fight that fight every time. We may not win every fight, perhaps we should not win every fight, but we should fight it all the same. Because even though 99 percent of expression is pointless, trite, repetitive, dull, offensive, vapid or shrill, that remaining one percent is worth more than we imagine. Very little of what comes out of a goldmine is gold but we keep the mine open because, in the filthy darkness, through that hard and tedious and sometimes dangerous rock, we know we will find those gleaming nuggets, precious beyond measure.

Exceptions to free speech, in societies that value it, are defined with painstaking narrowness precisely because violent criminals and (far more dangerously) the state will smell blood in the water and move against any speech it finds inconvenient, using any pretext it can. We may close off a vein of the mine to keep the whole structure from collapsing but we should do so extremely grudgingly and only when its necessity is beyond all doubt. After all, we do not know behind which forbidding tunnel the gold lies.

To be sure, there is a sharp line separating censorship and criticism, the distinction between permitting an action and endorsing it. Refraining from criticism and critique would be as disastrous to free speech as censorship. Hall said of the ever-controversial Voltaire: “I do not agree with what you say but I will defend to the death your right to say it.” There is a humility to this statement but also self interest: the right we defend today may tomorrow be our own. That said, nowhere is free expression utterly unqualified. To imagine this is pure romanticism. Generally, any time you use your speech to carry out another crime, to someone’s material or physical harm, you are not protected by free speech laws. A lawyer cannot betray confidentiality. A broker cannot commit fraud or engage in insider trading. A businessman cannot publish falsehoods against competitors to steal their clients. And so on.

There is another class of speech that can be and has been restricted. I will define it here as obscenity, though it carries different names and exists in varied precedents. Obscenity, for the purposes of this article, is speech that a) adds no possible value (that is to say, not a critique, or debate, or even pointed satire but purely meant to provoke or offend) and b) is incredibly offensive to a great majority of people in your country. To deny the holocaust, in France, is a crime. It is censored because it adds no value (the holocaust is probably the best documented genocide in history and mostly documented by the Nazi’s themselves) and is horrifically offensive. Why is the right to pornographically depict even Jesus Christ (believed to be the son of God by the majority religion in France) so staunchly protected and lionised, while holocaust denial is flat out illegal?

Simply put, it reflects what is unacceptable to that particular society. And there is nothing inherently illogical about this, though it lends a hypocritical tinge to the full throated, unqualified lionisation of free expression that so many have thrust to their chests like a flag pin. What constitutes an obscene abuse of free speech will vary from society to society. The great contradiction of globalism is that individual cultural differences, not to mention national borders, are still very much alive and well. If Pakistan achieved free expression and sat down to list its ‘obscene’ exceptions, we would probably not include holocaust denial — we rationally know it to be abhorrent but it does not strike us with a visceral blow — and instead choose to curtail anyone glorifying terrorism or mocking its victims. And no other society would have the right to force us to obey their cultural sensitivities rather than our own.

Is the desire for free expression universal? Absolutely. If you have never felt it, you almost certainly hold few opinions that, right or wrong, are terribly interesting. Is the right to free speech absolute? No, nowhere is it absolute. In a society that values free speech, can you legislate against holocaust denial? Denial of other war crimes and genocides? Obscene depictions of a spiritual figure who is, in an incredibly personal way, central to the lives of the people of your country? All of the above? You can. Should you, and which ones? That depends on the society. But these exceptions must be carefully, narrowly selected and defined because free expression, by and large, is worth tolerating a great deal for.

Free expression is the sunshine and the rain in which ideas, art and societies flourish. A casual reading of the World Press Freedom Index is compelling: there is a stark difference in the living profile of the top 10 countries and the bottom 10. Whether prosperity, education and social welfare bring freedom or the other way around, I certainly know which group I would rather aspire to be in. Because when ideas, ideologies and art of all shapes and forms, good and bad, collide with each other in the freewheeling, madly energetic marketplace of ideas wonderful things can happen. Cultures evolve. New ideas are born that may change the world, or at least our corner of it. Art rises that lifts a people and tells their story.

Truths are spoken that burn us and yet set us free. A small spark from an unassuming soul could ignite a generation, and these sparks are too precious to be lost in the chill of censorship.

No, free speech is never absolute. No right ever is. But every society owes it to itself to throw open as much of that mine as it can. There is gold to be had.