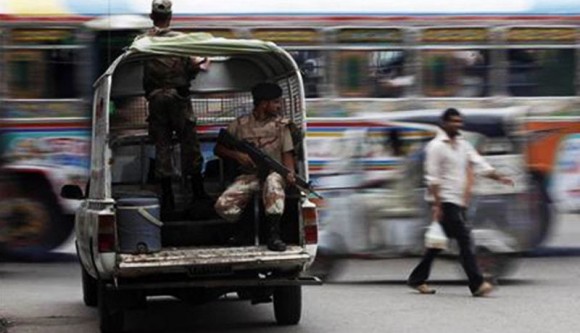 KARACHI: The Council of Pakistan Newspaper Editors has condemned a raid by Rangers on the house of Saeed Khawar, Resident Editor of Nawa-i-Waqt.

According to a statement issued by the CPNE on Monday, a meeting of the council expressed solidarity with Mr Khawar and called upon the director general of Pakistan Rangers, Sindh, to investigate the matter so that measures could be initiated to keep the Rangers’ actions transparent.

Saeed Khawar told Dawn that around 20 Rangers personnel surrounded his rented house in North Karachi on Sunday for about one hour. He said after receiving information about the raid, he rushed to his house.

Rangers’ personnel told him later that they had conducted the raid at a “wrong place” over some “misunderstanding”, he said.

The CPNE pointed out that the Rangers conducted the raid on suspicion that Mr Khawar had obtained an illegal water connection. At the time of the raid, Mr Khawar was out of his house but his two children and ailing wife were there. “The raid terrified the ailing wife and children of Mr Khawar,” said the CPNE.

The CPNE meeting, presided by its Senior Vice President Ilyas Shakir, passed a resolution, saying the media had always supported Pakistan Rangers, Sindh, on its targeted operation against criminals and terrorists but random and blind actions, raids and besieging residential colonies by the paramilitary force would make the media reconsider its position.

The meeting decided that a CPNE delegation would shortly meet the director general of Pakistan Rangers, Sindh, and ask him to conduct an inquiry into the incident.

Meanwhile, a spokesperson for the Rangers said he had talked to Mr Khawar and informed him that “we are looking into the matter”.