Home » Impunity » Why was Geo blocked, its position moved on cable: MPs 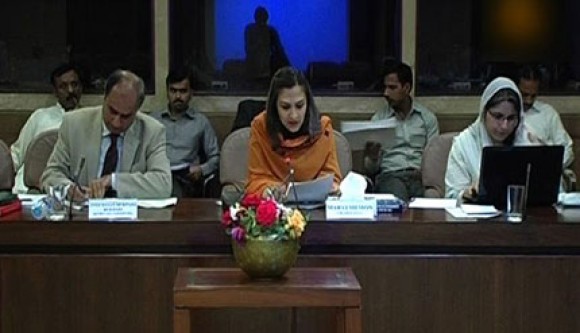 ISLAMABAD: Legislators here on Tuesday called on the Pakistan Electronic Media Regulatory Authority (Pemra) to find out why the Geo transmission was blocked and also why its position on the cable was changed to its disadvantage.

During the meeting of the National Assembly Standing Committee on Information and Broadcasting here under Marvi Memon, the committee members expressed concern over the targeting of Geo channel and the Jang Group by other private channels.

MQM’s Waseem Akhtar while speaking on the occasion, called for extreme caution by the media on matters of national security.

MNA Naeema Kishwar of the the JUI-F said that all television channels appeared to be hitting Geo in order to see it being shut down. She pointed out that Geo’s transmission had been blocked in certain areas, whereas at many places, its position on the cable had been changed.She wondered why Pemra was not taking notice of this situation.

PTI MNA Murad Saeed said that there were media rules and regulations but the real issue was of their implementation. He said that a channel had been broadcasting against an institution for eight hours and the interest of Pakistan was put at stake, but Pemra remained silent on it. He said that no statement on behalf of the Information Ministry or information minister was issued on the subject.

Talal Chaudhry of the PML-N said that it was improper to talk about a state institution continuously for eight hours and asked what would they call the other TV channels airing content for the past 18 days.

Some lawmakers said that other channels laboured under the misconception that Geo would be closed down and they would get more business after its closure. They wondered as to what Pemra was doing now. They asked as to why it was not moving to stop these channels from targeting Geo.

They contended that TV channels have no right to play the role of judges to label a rival channel as traitors. On the matter relating to the Pemra notice to Geo, Information Secretary Dr Nazir Saeed told the committee that the fact-finding report had been sent to the Ministry of Law for its opinion and said on the basis of a fact-finding report, a penalty could be inflicted.

With regards to the Media Laws Review Task Force, the meeting resolved to finalise the 10-member list of the legal taskforce and their work should commence.All members of the standing committee gave names for the task force, which were included and thus a political consensus and balance was maintained in the formation of the legal task force.

The committee reserved the right to add more members to the legal taskforce for its strengthening. Four to six months time frame was given to the task force to furnish its recommendations.

It was decided that periodic input would be taken from the legal task force on monthly basis to monitor progress. Stakeholders’ input was taken in sub-committee meetings chaired by MNA Beelum Husnain and MNA Arifa Khalid.

However, further public opinion and continued stakeholders input would continue to be sought through the standing committee’s website. The legal task force was asked to keep the Constitution, national integrity, national interest and freedom of expression as important elements whilst recommending laws.

Information, broadcasting and heritage laws were given to the legal taskforce for review. These included heritage, electronic, print, broadcasting, copyright, classical media, below the line advertising, journalist laws and any other media related laws.

The terms of reference (TORs) given to the legal task force are:

1. To conduct a comprehensive review of all existing laws, rules, regulations at the federal, provincial and local levels which are either directly named as media-related laws, or have a bearing on the operation and output of media.

2. To identify the needs, if any, for amendments, changes, etc in sections of such laws, rules,

regulations including ‘definitions ‘ and substantive provisions so as to accurately reflect contemporary realities and factors such as new technologies, and to propose specific amendments to existing laws, rules, regulations for consideration by the respective legislatures.

3. To draft texts for new laws, rules, regulations in the light of contemporary conditions and emerging trends, and with reference to the Recommendations of the Media Commission as unanimously endorsed by the National Assembly Standing Committee on Information, Broadcasting and National Heritage in its meeting on April 16, 2014.

4. Develop a monitoring framework for committee reference to have an oversight on the implementation of the existing and the amended laws rules regulations.

5. Any other term of reference that the task force experts may wish to add as a result of their deliberations with the approval of the committee.

Meanwhile, a Jang Group spokesman said they had complained to Pemra a number of time during for several weeks but it is turning a deaf ear to our grievances. He said Geo’s position on cable is pushed backward and being changed frequently. This has adverse impact on the Jang Group revenues and multinational companies have started cutting the number of ads. He said the Jang Group would challenge this treatment in the court.

He said it has already been clarified several times that it has leveled no allegation against any institution with regard to the attack on Geo anchor Hamid Mir. It was the stand of Hamid Mir, world renowned journalist, that was aired by Geo along with ISPR statement and picture of ISPR DG. This was in accordance with law, constitution and best practice in vogue. There was no ill intention or conspiracy in this regard.

Whenever there are news about allegation of corruption, murder etc against president, PM, members of parliament, bureaucracy and a layman, the electronic media airs it repeatedly. This will be proved when the time comes.