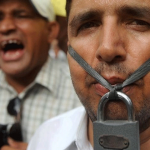 The Foreign Minister of Pakistan, Shah Mehmood Qureshi, was severely criticised by a Canadian social media activist during the ‘Global Conference for Media Freedom: London 2019’.

The complainant accused the Foreign Minister (his government) of censoring his Twitter account, telling him that ‘he had no right to silence his journalistic and personal freedom’. Both the UK and Canadian governments are working together to ‘defend media freedom’ and also improve the safety of journalists who report from across the world.

We must not be comparing ourselves with London, Berlin, Paris, Brussels or Washington — we are Islamabad. Some of media persons didn’t have the opportunity to do degree in political science from Harvard University (like Fareed Zakaria who hosts GPS for CNN Worldwide) or even in the relevant field of Mass communication.

The rise to glory of some of the famous programme hosts and anchors in Pakistan is not their education and resultant clear head that they may carry on their shoulders but due to some political backing or knowing the right person.

These media persons select facts present in the most favourable way that suits politics of one kind or another. Some of their narratives are in line with government and some may not be which unintentionally damage the state narrative on some international issue.

These media persons claim that they are the ones who shape and direct public opinion in any direction they chose. Pakistan fought and is still fighting a very hard war for which it is paying an extreme political, economic as well as social cost.

Instead of promoting national resilience and national beliefs and willingness to outlast any enemy, these media persons thin-slice political and military actions and deduce themes and stories that most intelligence estimates consider to be politically motivated and aimed at creating confusion amongst the civilian population.

Hardly ever understanding the military vision of the war and without emphasising that ‘make no mistake Pakistan is still at war’ some of the media persons instead of creating an atmosphere of cooperation, cohesion and national solidarity contribute towards creating political instability by promoting baseless propaganda, themes and stories that easily sway the mass public opinion in uncharted territory of doubt, uncertainty, reservations and suspicions.

The journalists who boycotted the ‘Global Conference for Media Freedom: London 2019’ because of the Pakistan’s Foreign Minister’s presence there must know that the reality and problems of Pakistani politics are radically different from those of the West.

Poor, over-organisation (bureaucracy) with uncontrollable population we are still fighting to develop the ‘philosophy of rationalism’ or the concept of rule of law — the two things that might help us to settle our political differences and conflicts like they helped the West to settle theirs.

The political masters of media person’s monopolised power and in the last ten years they did not give this nation ‘that certain level of economic and social development’ that could help the nation to self-sustain itself.

Now that a man has come to challenge their political ineptitude, incompetence, corruption and ineffectiveness and has subjected them to a process of accountability (that he promised to the nation) these media persons had no choice but to compulsorily come out in the defence of their political masters and feeders — thus they stand exposed.

For the current government the most essential national interest is survival and beyond that it is responsible for maintaining sovereignty and protecting and safeguarding the territorial integrity of Pakistan. It is not the freedom of expression that is more important — what is important is the right of the people to survive in peace and stability, their right to secure descent life with human dignity.

These rights are more valuable than the rights of the freedom of speech which can be misused, the rights of holding political demonstrations which is being used to deflect people’s attention from the corruption in which the politicians indulged in the past.

Franklin Delano Roosevelt (FDR) is the only American president to serve four terms in office. The war president defended his right to interpret the constitution independently which required throwing direct challenges at the congress and ignoring the commands of the congress and even the Supreme Court.

FDR’s willingness to press and stretch the limits of his executive power proved as the most vital component to the American nation’s resolve in succeeding in World War II. French president Charles de Gaulle who was troubled by the Algeria’s independence movement in 1950s prolonged his term in office to seven years to attain presidential authority and executed harsh actions including media purges to maintain political stability.

These examples verify that the political environment, circumstances and conditions dictate leaders to adapt coercive measures and demonstrate ruthlessness in protecting and safeguarding the national integrity and honour. Both FDR and Charles De Gaulle were war presidents.

Pakistan is still not done with the war that it continues to fight. All those who come in the way of national resolve and the will to survive may just receive the medicine that war presidents have been administering to such ‘distracters and spoilers of national beliefs’ in the past.