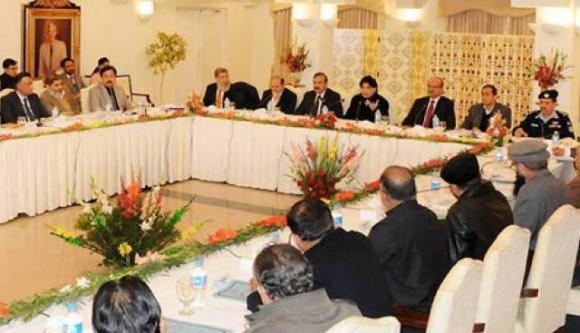 ISLAMABAD: Interior minister Chaudhry Nisar Ali Khan has expressed displeasure over the performance of the government functionaries who, according to him, are not delivering to the optimum level.

“Government functionaries are not ready to work and apparently everyone seems to be failing in the country,” the minister remarked while addressing a meeting of the city administration officials and stakeholders regarding security issues of media houses, markets, educational institutes and traders at the Punjab House here on Thursday.

One can’t absolve himself of his responsibilities by deploying mere two to three security guards at the gates of buildings as the terrorists are highly trained and well equipped.

There should be the deployment of a police official equipped with a sub-machine gun (SMG) on the rooftop of a media house who could respond swiftly to any terrorist act.

He also expressed his annoyance at the deadline of 15 days given by the Capital Development Authority (CDA) to 359 schools for moving out of the residential areas putting the school owners and students in problems.

While responding to a suggestion regarding the security of media houses, he said a standard operating procedure (SOP) is on the cards in this connection.

Responding to another point that media houses should be informed about any threat to them, he said most of the intelligence regarding threat turns out to be a hoax as they are aired to spread panic and fear.

“I will share threats with the departments which have the mandate to respond to any as such threats,” he said.

Khan said that a bullet fire near a women college at Rawalpindi created such a panic and chaos.

Khan said he has issued orders to the security agencies to conduct an inquiry what was done to defuse the tension. He said a superintendent of police will be appointed as a focal person regarding the security of media houses, markets and schools. He said the automatic weapons’ licences for the media houses’ security would be issued.

While responding to the grievances of citizens they face at security checkpoints at Red-Zone, he said microchips installation is being considered at the vehicles which daily visit the area to be exempted from standing in the queue for security purposes. Moreover, he agreed that there would be no traffic police official at any checkpoints for checking documents of vehicles which create problems for motorists.

He asked the traffic police to refrain from giving challans to the common man on minor violations. However, he said, any influential person who violates traffic rules must be issued a ticket.

He also said 150 more mobiles would be handed over to the police and the rangers next month to enhance security in the city.

He said for the security of markets barriers may also be erected which will remain open and could be closed in case of emergency situation.

Regarding the security of markets and schools, he said entry points will be monitored by the law enforcing agencies to stop any terrorist activity. He also maintained that Islamabad is a high profile target regarding terrorist activities and Safe City Project will give a solution to security related issues.