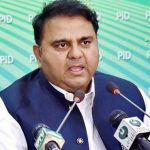 LAHORE: Federal Science and Technology Minister Fawad Chaudhry slapped an anchorperson for defaming him on Sunday.

Anchorperson Mubasher Lucman has now become the second victim of the minister’s outrage over the past six months. Earlier he had slapped Sami Ibrahim in June.

Mr Chaudhry slapped Mr Lucman allegedly for tagging him with TikTok stars Hareem Shah and Sandal Khattak. Mr Lucman claimed on his Youtube channel that both “stars” had “immoral videos” of the minister.

Soon after the incident, Mr Chaudhry took to Twitter and chided Mr Lucman, labelling him as an “infiltrator” into journalism. “People like Mubasher Lucman have nothing to do with journalism. Such people are intruders and need to be exposed as such by everyone,” he tweeted.

As the two scuffled, PTI leaders and some journalists stepped in.

Mr Lucman had run a 22-minute programme with a private news channel’s anchorperson Rai Saqib Kharal “explaining” that the TikTok stars had a volume of “immoral videos” of some PTI ministers and senior bureaucrats. In particular, the show claimed that the two girls had several videos of the science and technology minister and could release them any time.

The show also claimed that Punjab Information Minister Fayyaz-ul-Hassan Chohan had close links with the girls and had been ­in­­troducing them to top political figures of the PTI government.

Referring to a leaked audio of Mr Chohan giving instructions to Ms Shah that she should steer clear of Mr Lucman and Mr Kharal, the show said the two girls had recorded Mr Chohan too.

Dawn tried to get comments from Mr Lucman, but his phone was off.

Defending himself, Mr Chaudhry said he did so to “give a sort of reply” to the allegations levelled against him. “One should be ready to face a reaction when you level allegations against anyone.”

Mr Chaudhry said Mr Lucman had no video of him and was levelling allegations simply to improve the rating for his channel.

“I have never met Hareem Shah and any allegation of immoral videos is just baseless.”

The minister said several people met him at different events almost every day and if someone had a selfie with him, it did not mean that “I have any links with the ­individual”.