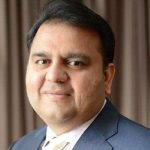 Talking to a private news channel he stated that it was not a strange act as rest of the world had taken that initiative of regulating the social media already for the stoppage of hateful and harmful content, moreover innocent users would be safe from the cyber victimization.

“Safety of national security and curb of hateful content is the first priority of the government, the national coordinator, review committee and high court would decide to remove any suggested content, he informed. The people misusing these platforms for any objectionable content would be stopped from using the technology against the opponents as hateful content and inappropriate material would not be allowed to go online, he shared.

Replying to a question regarding Nawaz Sharif’s prolonged health visit he said Nawaz Sharif was found guilty in corruption charges and if he would not reach country within stipulated time the government would contact the UK court for the convicted repatriation.