Home » Featured » Fawad insists on one regulatory authority for all media 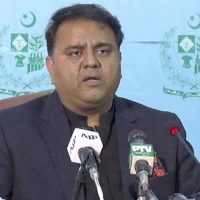 ISLAMABAD: Informa­tion Minister Fawad Chaudhry on Monday said that there was a need to have a centralised regulatory authority for all types of media, including print, electronic and digital.

Briefing a meeting of the Senate Standing Committee on Information presided over by Senator Faisal Javed, the minister said that advancement of technology had led to converging of all news and entertainment media in mobile phones.

“To meet the requirements of the emerging scenario, the government has planned to set up a new regulatory authority for all types of media and it has been named Pakistan Media Regulatory Authority (PMRA),” he said, adding that he had held meetings with political leaders to discuss the formation of the new media regulatory authority. “The authority will be established with the consensus of all stakeholders and it would be free from government intervention,” Mr Chaudhry said.

The committee was informed that the Press Council of Pakistan (PCP) was looking after the matters of print media, the Pakistan Electronic Media Regulatory Authority (Pemra) was regulating the affairs of electronic media and the Pakistan Telecommunication Authority was overseeing cellular companies and digital media.

The minister also tried to dispel the impression that the new regulatory body was being established to curb media freedom in the country. He said the media in Pakistan enjoyed more freedom than any other country in the Muslim world as well as in the Third World. “The present government believes in freedom of expression and does not want to impose any curb on free media,” he told the committee.

Mr Chaudhry said the print media workers were provided protection under laws, but there were no rules and regulations for protection of the rights of electronic media workers. He added that the owners of electronic media were facing problems because they had to deal with different regulatory authorities and they too would benefit from the establishment of a centralised regulatory body.

“Besides, advertisements are shifting from news channels to digital forum which too has created problem for news media,” the minister added.

The chairman of the committee was of the opinion that the world was moving towards specialisation and, therefore, there was a need to have specialised regulations. “But there should be no compromise on freedom of expression. This is the stance of the Senate committee as well as Prime Minister Imran Khan,” Senator Javed emphasised.

However, the committee deferred the agenda item related to PMRA after senators Rubina Khabld, Khushbakhat Shujaat and Pir Sabir Shah said it was a serious issue and should be discussed in the presence of all members of the committee and currently only three members were present at the meeting.

The meeting took a serious turn when the information minister pointed out that retired and serving employees of the state-run Pakistan Television were protesting outside the Pemra headquarters — the venue of the committee meeting. He said the retired employees were demanding payment of their pensions and the serving ones had their own woes.

The agenda item relating to PTV’s performance could not be taken up as its managing director Arshad Khan did not attend the meeting due to the protest whose participants were demanding his resignation.

After the meeting, the information minister and members of the committee met the protesting PTV employees.

Talking to the media, Mr Chaudhry said the entire PTV was on one side whereas its MD was on the other side, adding that the MD had failed to attend his office in the PTV headquarters for the past 23 days due to the protest by its employees. “MD PTV should tender resignation voluntarily as he is unable to run the affairs of the institution,” the minister demanded.

Meanwhile, a group of retired PTV employees blocked the entrance to the PTV headquarters situated in the red zone area as their dues were not cleared by the state-run institution.

Later in the evening, breaking news tickers were run on PTV News giving the version of MD Arshad Khan who said PTV would be made an independent and autonomous institution like BBC as per the vision of Prime Minister Khan, and restructuring had started in PTV.

Talking to Dawn, Fawad Chaudhry said he had held meetings with opposition leaders belonging to the PPP and PML-N to brief them on the government’s move to set up the PMRA and develop a consensus on the matter. He said he had talked to PPP senators Mustafa Nawaz Khokhar and Rubina Khalid, as well as PML-N’s spokesperson Marriyum Aurangzeb.

When contacted, Ms Aurangzeb said that during her meeting with the information minister, she had also raised the issue of delay in implementation of the cultural policy. “We also discussed the prevailing crisis in PTV,” she added.