Home » Featured » Farhatullah for parliamentary body on freedom of expression 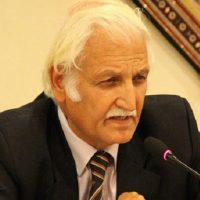 Some brandish guns, some hold religious books and some others wield contempt law and dissent and as a result free expression is stifled. This has been stated by Senator Farhatullah Babar while addressing a seminar on ‘Media & Democracy’ organised by the National Institute of Cultural Studies here at Lok Virsa on Saturday, according to a press release.

Identifying factors influencing the role of media, he said that corporatization of media houses, the erosion of distinction between professional editors and owners, weak culture of resistance journalism and the security establishment’s deep inroads in media industry were some factors that hampered right to information and free expression.

He urged the young journalists to take ownership and develop culture of resistance journalism and proposed the setting up of a parliamentary committee on freedom of expression. The media and talk shows promote intolerance because the society itself had become intolerant and jehadi narrative seemed to prevail.

Countering the militants’ jehadi narrative was not easy, he said. It will take time and require persistent struggle for freedom of expression, academic freedoms and coming of out of the state of denial with respect to militant organisations, he said.