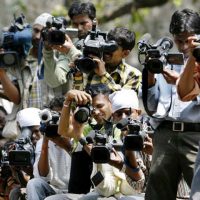 KARACHI: Speakers at a session in the ongoing Festival of Arts and Ideas organised by Sindh Madressatul Islam University (SMIU) on Thursday said that despite being influenced by highly divisive society of the country, Pakistani media has still managed to play its role in trying to disseminate untwisted information to people.

At a session titled ‘Media and the state: Is honeymoon over?’, speakers, however, blamed a section of the electronic media for “negative” reporting because of rat race for ratings that eventually painted negative image of the country.

They said the country was divided on various fronts as there were people who supported fundamentalism and there were others who sided with liberal and progressive ideas, yet media outlets in general were ensuring that factual information reached the people.

They, however, blamed the rat race for ratings that had often forced a section of the electronic media to run twisted and incorrect news reports and disinformation on prime-time talk shows.

“Fundamentalism has gripped the country on the one hand and on the other there are liberal forces. Similarly, our society is divided on ideological grounds as well and in such a situation, media is still making it possible to inform people honestly,” said journalist Ghazi Salahuddin.

Columnist Wusatullah Khan said that media was not just limited to a newspaper or a news channel, but books, poetry, fiction and drama also fall in its vast definition. He said that freedom of expression had been achieved through great struggles in the world.

Mr Khan also spoke about the current financial crisis as being claimed by some media outlets. He said that media organisations got merely a quarter of their advertisements from the government while the rest [75 per cent] came from the private sector.

He said that the overall nature of media was also changing because it had to entertain the dictation of clients who paid for advertisements.

Journalist Mazhar Abbas said that most talk shows on news channels were negative in nature and ratings were the key culprit to blame for it.

He said that most of the wrong information being relayed on electronic media was the result of continuous pressure of deadlines and race for ratings, and such misreporting could not be rectified later on.

“Our reporting is irresponsible and this is leading society to the negative path.”

Owais Zaidi of the Pakistan Electronic Media Regulatory Authority said that people were gradually getting aware of what was happening in the country and elsewhere in the world.

Speaking at the distinguished lecture series, journalist and intellectual I.A. Rehman spoke at length about the history of media in the country.

He informed the young audience about troubles that journalists faced while struggling for freedom of press in the country.

He said that Gen Ziaul Haq’s dictatorship was the worst in the country’s history when newspapers had been forced to publish empty spaces as authorities used to censor the news originally pasted on pre-press copy.

The country’s revered rights activist said that the authorities at the time had censored Faiz’s poetry and even the reference to pharaoh, as written in the holy texts, in newspapers perturbed authorities.

He said such events were highly important for the young generation as they would help create a culture of tolerance and respect for dissent.

Separately, Madiha Rehman reviewed the works of novelist Kamila Shamsie in ‘Life of an author’ session.