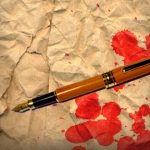 “My brother’s case is just a file which is locked in some cupboard, I guess,” said Abdul Razzaq as he discussed the case of his brother, Abdul Haq Baloch, a correspondent for ARY News television station and Khuzdar Press Club, who was murdered on September 29, 2012.

Eight years ago, Baloch was gunned down by unidentified armed men when he was on his way home to his hometown of Khuzdar in Pakistan’s restive Balochistan province.

Unidentified masked armed men on a motorbike sprayed Baloch with a volley of bullets and he was fatally shot after which the assailants fled the scene.

He left behind a widow and two sons.

On August 26, 2020, Baloch’s brother Razzaq said that eight years on, his brother’s case remains under investigation, adding that he is not satisfied with the progress of the case. He noted that whenever he goes to a police station he is told they can’t find any clues to Baloch’s murder.

City Police Station Station House Officer (SHO) Amanullah told Pakistan Press Foundation (PPF) that none of the accused in the case had been arrested yet. He said that it remains under investigation and has been categorized as a Class-A case, which pertains to cases in which the accused are unknown or untraceable.

The former Khuzdar Press Club President Allah Buksh Nadeem said that in 2012, when he was president of the club, eight journalists were killed and authorities had filed criminal complaints, First Information Report (FIR), against unknown people. He said none of the accused were arrested and no proper investigations were carried out.

Nadeem said that working as a journalist in Balochistan is very difficult as there are many elements and parties, who he said, harass and threaten journalists because they want only their versions to be published “… which is not in our hands as we are just a bureau not a head office or an owner of any journalist organization,” he said, adding that no one knows why Baloch was killed and who was behind it.

Journalists in Khuzdar said it was difficult to guess who may have been behind the murder as there were a number of opposing militant groups in the area; some support separatists while others are opposed to them. In 2012, President of the Balochistan Union of Journalists (BUJ), Essa Tareen, had told PPF in a telephone message, the separatist group Balochistan Liberation Army (BLA) had warned all leading newspaper offices in Balochistan to give coverage to its activities or face dire consequences. The BLA, however, denied it was behind Baloch’s murder.

Meanwhile, senior journalist Hamid Mir had told the Committee to Protect Journalists (CPJ) that Baloch had been threatened by the Baluch Musalah Diffa Army (BMDA) in November and was named on a hitlist issued by their spokesperson. Speaking to PPF, current Khuzdar Press Club President Abdullah Shewani also reiterated the same.