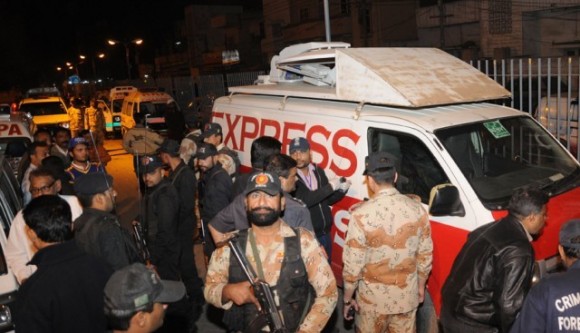 While Iraq topped the list of countries where killings of journalists go unscathed, Pakistan showed a modest improvement with the conviction of six men for the assassination of Wali Khan Babar.
CPJ’s (Committee to Protect Journalists) 2014 Global Impunity Index, referring to Wali Khan Babr’s case, noted that Pakistan has shown improvement with regard to punishing the culprits responsible for slaying journalist and moved to 9th place on Impunity Index Rating, where it had ranked 8th last year.

The report highlighted that despite six people being convicted in the case, justice is far from complete as two convicts are still at large and mastermind of the killing is yet to be identified. The report also mentions that during the trial, five more people linked to the case were also murdered including witnesses, informants, and investigators.

The conviction seems to have had scant impact on those who are targeting the media in Pakistan. Three staffers of Express Media group were killed in January, while analyst and anchor of Express News show “Khabar Se Agay” Raza Rumi, came under a gun attack in Lahore on March 28, 2014, in which his driver, Mustafa, was killed and his guard injured.

Separately, Express News bureau chief in Peshawar Jamshed Baghwan was targeted twice within the span of one month. First a bomb was found outside his house on March 21, while on April 7 a hand grenade was hurled at his residence in Peshawar. Perpetrators in all the attacks are yet to be apprehended.

With 100 journalists murdered in the last decade and 100 per cent impunity, Iraq remains the worst offender on the Impunity Index, a spot it has held since 2008. The two year silence in fatal anti-press violence was broke with the nine new murders in late 2013. The rate of unsolved journalist murders per million inhabitants has increased from 2.818 to 3.067.

Somalia and Philippines have also retained their spots on the Impunity Index, second and third slots respectively. Somalia’s rating worsened for the sixth year in a row. Although the anti-press violence has moved slightly down from its record high in 2012, with four new murders in 2013, journalists continue to be targeted.

Battle hit Syria has joined the ranks of Iraq and Somalia for the first time this year. Syria has been dubbed as the most dangerous country for the journalists with more than 60 media persons been killed in the cross fire and unprecedented number of abductions. Now deliberate murders of journalists have made it a worst, at least seven journalists have been targeted in Syria since 2012, with all complete impunity. The perpetrators come from all sides—non-Syrian militant groups, rebels targeting pro-government media, and President Bashar al-Assad’s forces. Syria is placed fifth on the impunity index at the rate of 0.313 unsolved journalist murders per million inhabitants.