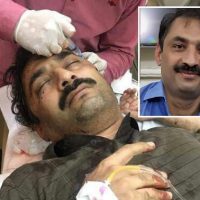 LAHORE: Journalists, political workers and civil society activists staged demonstrations against an attack on The News senior reporter Ahmed Noorani in various cities on Sunday. They demanded immediate arrest of the culprits.

In Gujranwala, PML-N senior leader Ghulam Dastgir Khan said the attack on Noorani was a cowardly act. He asked Interior Minister Ahsan Iqbal to probe the matter and punish the responsible. Talking to party workers at his residence, he said the PML-N government believed in freedom of expression. He said those who attacked Noorani expressed their difference of opinion through violence that was not acceptable in any society.

In Jhelum, PPP leaders Khawaja Asif Javed and Tariq Naseem Butt condemned the attack. They also demanded punishment for those involved in the attack.

During his address, The News correspondent Khan Imtiaz Ali Khan said the assault on Ahmed Noorani was not an attack on an individual but an attack on independence of journalism.