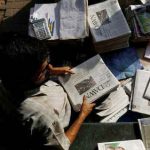 KARACHI: The Council of Pakistan Newspaper Editors (CPNE) on Thursday expressed grave concern over a ban imposed by the federal government on advertisement to the Dawn Media Group, calling it a move against freedom of expression.

In a statement, CPNE president Arif Nizami, senior vice president Imtinan Shahid and secretary general Jabbar Khattak said the policy devised by the elected government was in fact a reflection of dictatorial mindset, which always used government advertisement as a tool against press freedom.

“The elected government should avoid such tactics. The advertisement and other curbs on media do not only affect the workers associated with the industry negatively but they also make a dent on the constitutional right of every citizen,” said the statement.

The body demanded Prime Minister Imran Khan personally intervene in the matter and lift the ban on government advertising to the Dawn Media Group.