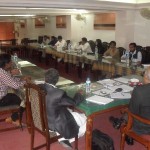 A grave situation prevails in Balochistan where the civil society organizations have removed boards and name plates from their office buildings, their staff and officials do not carry ID cards or any other document while travelling for the fear of militants. According to them the NGO people are the main target of militants and other criminals who kidnap them for ransom.

Almost all the representatives of NGOs attending the consultative workshop on “Working with Media on Human Rights” organized by Pakistan Press Foundation here told that militants consider them lucrative, as they believe that NGOs are heavily funded by international organizations. Quoting certain incidents of kidnapping of NGO officials in Balochistan, the participants informed that ransom demanded by kidnappers, ranges up to twenty million Pakistani rupees. 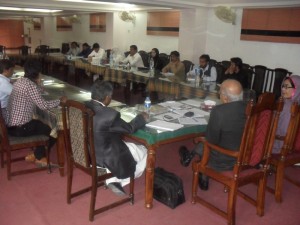 The NGO people also receive threats from tribesmen. In such a situation, the organizations have restricted their work. “For example, we do not spread our work to more than one village and keep on working silently in a village so that we are not exposed to other people,” Ahmed Nawaz, CEO, National Capacity Building Program, told.

He said, ”We avoid releasing news to the media and instead prefer to post it on website, Twitter and other social media so that the kidnappers and militants do not know about our activities.”

The situation deteriorated since 2008 when the NGO officials were kidnapped for ransom or killed for non-payment of ransom. The threats to NGO people are now order of the day.

The participants also had complaints against media persons. They contended that newspapers and TV channels do not support NGOs working for human rights. They leveled serious allegations of corruption against the journalists. Some of the participants told that journalists used to cover their events in the past but now they avoid it as the journalists too receive threats from militants. A representative from Loralai area told that journalists have stopped covering NGO activities after receiving threats.

Some participants informed that whenever they issue any press release, the newspapers publish it after some days and for that also the journalists expect payments by NGOs. The newspapers demand advertisements from NGOs and do not respond otherwise.

During the discussion the participants however agreed that there exists wide gap between the NGOs and the print and electronic media because of lack of coordination.

Some of the participants informed that their organizations purchased airtime of local FM radios for creating awareness among the masses.

During the panel discussion Mr. Raza-ur-Rehman, resident editor, Urdu Daily Express and Bureau Chief, Express TV, who is also the current president of Quetta Press Club, presented the viewpoint of journalists saying that they too were performing duty under stress. “Like NGOs, the journalists too are receiving threats of dire consequences. We are asked by militants and tribal heads not to publish any news against them. Life threats are also extended in case we do not publish their statements,” he said. 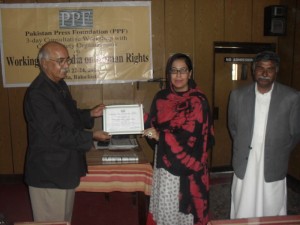 He agreed that some journalists could be involved in unethical practices however said that the attitude of newspapers and TV channels was in the process of change, although slowly.

Raza-ur-Rehman advised the NGO people to come closer to the media and offered his help in this regard.

Mr. Javed Akhtar, Bureau Chief PPI also expressed similar views and offered NGOs to keep in touch with them for releasing their news on work being done by them in the field of human rights.

It also came to the fore that the newspapers are not allowed to be delivered in the interior of Balochistan while the news channels too have been closed in different areas.

During the interaction with participants it transpired that none of the NGO had any Public Relations section or Media Cell to deal with newspapers and electronic media. Any of the officials of NGO is assigned to come into contact with media when needed. The participants were explained how they can setup a proper section for the purpose. They however urged to conduct further workshops in this regard, as despite holding master’s degrees in different subjects they were lacking such knowledge and training.

In view of security concerns, the participants suggested holding security trainings for the persons working in NGO sector. They said the situation in Balochistan and Khyber Pakhtoonkhaw was totally different from Sindh and Punjab and should be addressed differently.

The participants welcomed the PPF move of inviting senior journalists to the workshop and termed it ‘ice-breaking’ and urged to arrange more sessions with journalists for closer cooperation in highlighting the work being done in the fields of different human rights. Currently different organizations are working on street children, gender equality, rescue and relief in disaster-hit areas, education, health, child labor and many other issues.