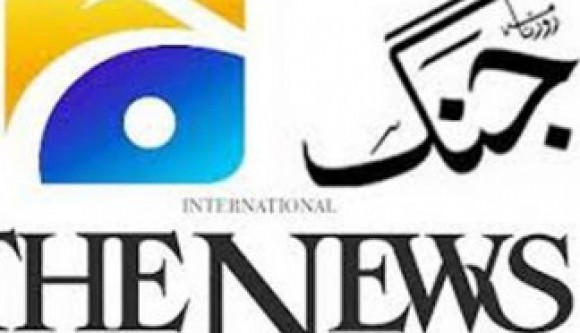 LAHORE: Civil society members, labour leaders, politicians and the Jang Group staff were of the unanimous opinion that the Jang Group had a known history of resisting military dictatorship, cruelty and injustices in the society, while it always supported and promoted civic rights, justice and freedom of expression.

They said the founder of Jang group, Mir Khalil-ur-Rehman, sided with Quaid-e-Azam during the struggle for creation of Pakistan. The Jang Group had a history of facing hardships and restrictions but it never compromised on showing and saying the truth. They claimed it was a shameful act that the Jang and Geo were being pushed to the wall to an extent that they would have to prove their patriotism. They pledged to resist any effort to sabotage the freedom of expression under any pretext as they had earned it through countless sacrifices.

During a demonstration arranged to show solidarity with the Jang Group and pay homage to injured Hamid Mir, Pakistan’s flag-hoisting ceremony was also held Sunday outside the Jang office on Davis Road.

Speaking on the occasion, former MNA Inamullah Niazi said he was feeling embarrassment that he needed certificate from certain quarters to prove himself a Pakistani, adding that it was strange that Hamid Mir, who had put his life at risk, was being targeted.

He came hard on Imran Khan and stated that the leaders like him, who consumed foreign food in their breakfast, were now exposed before the people. Imran was now dancing on the tunes of hidden hands.

Describing the PTI chief as Tsunami Khan, Niazi asked him to tell people as on whose instructions he joined politics and why he was making the media group a target. He expressed the confidence that the people conspiring against freedom of press would finally face humiliation and defeat.

Niazi said he would soon be on the roads for the independence of media, adding that the charges against the Jang and Geo must have made the soul of Mir Khalil-ur-Rehman restless.

Labour leader Khursheed Ahmed said Mir Khalil-ur-Rehman devoted himself for the freedom of media. He saluted the journalists for rendering maximum sacrifices to maintain freedom of press because they always spoke truth.

Iftikhar Shahid from People’s Lawyers Forum said the civil society members had gathered here after 66 years only to prove that they were patriotic. He said their forefathers had spilled their blood for Pakistan but certain forces had made them culprits. He was of the view that the incomplete Pemra had no legal standing; therefore, its decision would have no value.

Khawar Naeem Hashmi from Geo claimed that just like democracy, dictatorship too had four pillars and the pillars of the last dictatorship were Pervez Musharraf, Tahir-ul-Qadri, Imran Khan and former president Farooq Leghari.

Referring to Imran and Qadri, he stated that only two pillars were left which could not provide strength to a new dictator. He termed these two pillars of dictatorship as depilated walls which required just one strong push.

Abdullah Malik strongly criticised those which were tagging the Jang group as traitor and said civil society would play its role for ensuring the independence of media.

Wasif Nagi – also from Jang Group – was of the view that the Jang group had always represented people of Pakistan on every critical juncture.

He said the powers that had accused Wali Khan, Nawab Akbar Bugti, Benazir Bhutto and many other leaders of being traitor were now after the Jang group which had always foiled such attempts. He questioned whether it was a crime to raise the voice of missing persons in Pakistan.

Jang Groups’ Maqsood Butt stated it was strange that the people, who always struggled for the betterment of Pakistan, were being asked to prove their patriotism.Jang Group’s Khalid Farooqi said the government and certain institutions should focus on development of Pakistan instead of muzzling the Jang Group.

Jang Group’s Shaheen Qureshi said they were holding the flag-hoisting ceremony but it did not mean that they needed any certificate from anyone to prove the Jang and Geo were patriotic. He said Geo was being blocked in the cantonment areas, which was a conspiracy against Pakistan, democracy and the media house. He also said those selling tobacco, education and gold were now selling media to people. Nisar Safdar Advocate reminded the gathering that no army in the world could defeat its own people.

He said Hamid Mir was a symbol of logic which could not be defeated.Civil society activists Shahida Jabeen and Amna Malik said no one would ever be able to silence the Geo.