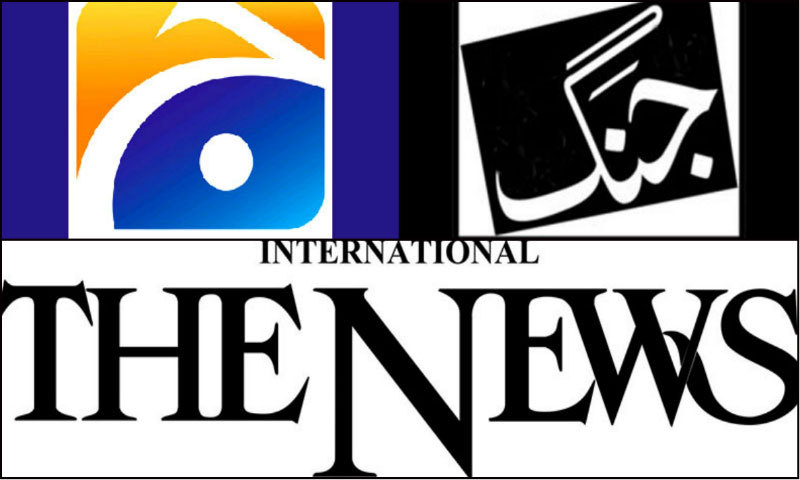 ISLAMABAD: In response to the cable operators’ bogus excuses that they cannot show Geo because of security threats, a Jang Group spokesman has come up with a rejoinder.

The spokesman said as many as five channels also faced many court cases and police action in this regard but surprisingly, the cable operators do not receive threats for showing these channels. Even before Geo has shown it, two leading channels have already aired it many times.

The spokesman said a security threat was also raised as an excuse during the last government when cable operators suspended transmission of Geo News. The excuse of a security threat then was exposed as completely bogus when the Supreme Court of Pakistan told chairman Pemra that he could not leave the courtroom till the Geo News transmission was restored by cable operators all over the country. The result was that within three hours, Geo News’ transmission was restored all over the country.

The spokesman said cable operators, just like broadcasters, are operating on the basis of a licence that they have applied for and that Pemra has granted them. The basic term of the license is that no cable operator can itself suspend or disrupt transmission of a licensed channel unless Pemra directs it to do so. If a cable operator violates this term of licence, its licence is liable to be revoked. Even if security threat is accepted as genuine, this cannot be used as an excuse for a cable operator to violate the term of their licence by illegally suspending Geo’s transmission.

He reminded that when Chief Justice of Balochistan High Court Qazi Faiz Isa summoned journalists and editors of all the newspapers of Balochistan and questioned them as to why they were publishing versions of terrorists, who claimed responsibility of killing policemen. When publishers of those newspapers produced before him evidence of serious threat that they are facing in Balochistan, Chief Justice Qazi Faiz Isa gave them a long summon. He said that don’t publish any newspaper if you cannot face any threat. He said if security threat is accepted as a valid excuse to break the law then there will be anarchy all over the country. The chief justice also said that if security threat is valid then he and his fellow judges in Balochistan should stop hearing cases and dispensing justice just because their lives were threatened.

The spokesman said the cable operators have decided to do their business in Pakistan within the prevailing environment. They cannot pretend that they are working in some European country. Lawyers, judges, police etc. everyone is facing security threat in Pakistan these days. This does not exempt people to just violate their legal obligation and use security threat as an excuse.

He said Geo itself received a most direct and serious threat in writing from terrorists who wanted their version and their ideology to be properly broadcasted. “Just because it received the threat, can Geo broadcast TTP’s version when it is murdering and beheading our soldiers? Will its licence not be liable to be revoked? Can any channel in Pakistan start showing TTP’s version round the clock just because it is facing security threats?”

The spokesman further said even if the threat being faced by cable operators is genuine, then it has nothing to do between cable operation (the licensee) and Pemra (the licensor) for correct and legal position is if any cable operator violates terms of its licence, e.g. by keeping transmission of Geo suspended when Pemra has directed them to show it, its licence is liable to be revoked. If a cable operator is receiving life threat because of some business dispute or professional rivalry or from some extortionist or criminals or even because of showing any channel of Geo, it is a matter between cable operator and police. If they are facing any threat then they should seek help from police and pursue remedies through law enforcing agencies. Instead of the path provided under the law they cannot just suspend valid transmission of Geo and thus violate a direction of Pemra.

“a. All cable operators are liable to show Geo channels;

b. 80 percent cable operators are not showing it because some hidden force is threatening all of them from doing so;

c. There is nothing that the federal government can do about it because it simply has no writ to do anything about the people who are threatening cable operators.”

After that, at least Geo can claim compensation for the government’s failure to fulfil its obligations.

On the cable operators excuse that they are showing Geo at last numbers because it is their discretion on which number to show it and also that number of TV channels that have been licensed by Pemra is far in excess of the capacity of TV sets owned by ordinary people, the spokesman reminded that in 2010, when hearing a petition of Geo, honourable Supreme Court set up a one-member media commission to look, among other things, into the issue of shuffling and placement of channels. According to the commission report, cable operators are constitutionally required to show TV channels having nationwide viewership at starting numbers. This was a constitutional requirement and the right of the viewers. The commission also found that shuffling of channels, disrupting their signals, throwing them at last numbers etc. was illegal. The honourable Supreme Court adopted that report and made it part of its judgment.

In the latest petition of Geo News, honourable Supreme Court has once again reproduced from 2010 judgment and from the Media Commission Report and disposed off Geo News’ petition only when Pemra undertook to restore the channel to its original position. So it is not up to discretion of cable operators to decide to show Geo News at No. 3 position today and No. 93 tomorrow. According to the Supreme Court judgment each cable operator has a constitutional obligation to show Geo News and all Geo channels at their original starting numbers.

The spokesman said Pemra’s direction to cable operators also requires each licensee cable operator to restore Geo news transmission at its original position. This also shows that the discussion of their own discretion and capacity of TV set is bogus and mala fide.

The spokesman said all cable operators were showing Geo channels at certain numbers on 19th April. “Why is it that after Pemra received a complaint about Geo following attack on Hamid Mir on 19th April, cable operators are either blocking its transmission or are making every kind of excuse not to show it at its original position? Why is it all of a sudden cable operators are using excuses such as it being a matter of their own discretion and that TV sets do not have capacity to show all the licensed channels when there was no such talk before 19th April 2014?”

The spokesman said the original scheme put in place through Pemra Ordinance for regulation of electronic industry anticipated and sought to prevent this very problem by barring any broadcasters from owning or controlling a cable business and vice versa. The implementers of the scheme were aware that even if one TV broadcaster were given control over cable operation, it would use that power to damage competitors in the same way that the Geo’s competitors are doing today.

The spokesman said the real problem is that one media group that owns one news channel has purchased or, directly or indirectly, concluded a business deal with cable operators in the country while apparently cable operators are still continuing with their previous names and owners, in reality they are in the hands of one media group, the owner of which is openly boasting that Geo is finished, “I will keep Geo channels off air and because of lack of viewership they will not get any advertisements and they will go bankrupt anytime now.” The spokesman said all cable operators led by Khalid Arain are now employees of that group and they only do and say what the owner of that group instructs them to do.

Both Khalid Arain and owner of the media group use the name of hidden hands to get the Geo closed. They claim that they are acting on behalf of hidden hands. They also arrange meetings of cable operators with hidden hands.

The spokesman said if the apex court forms a commission, many secrets will come to the fore. He said the Pemra and the federal government are fully aware about the above dangerous development and are yet avoiding doing anything about it.