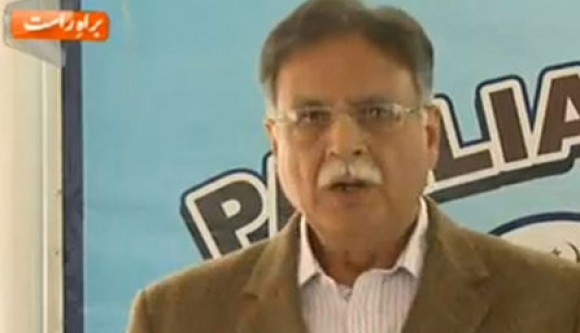 LAHORE: Federal Minister for Information and Broadcasting Senator Pervaiz Rashid has said the law was taken into their hands on the Geo TV issue and that cable operators have no authority to decide which channel can go on air and which cannot.

Also, he added, the army and the government stand united over the issue of national interests.

Talking to the media here on Saturday, the minister said the cable operators were not authorised to ban any TV channel and warned that strict action would be taken against those who violated the law and banned channels.

Pervaiz Rashid said the Pakistan Army is standing by the government to improve ties with India. He said it was not the army but an individual Pervez Musharraf who took the decision on Kargil and then had to go down on his knees before the then Indian Prime Minister Atal Bihari Vajpayee.

He said the army as an institution had never intervened to sabotage Pakistan-India relations and stated he was hopeful it would not be done in future.

Senator Pervaiz Rashid said we as a nation should look forward and put behind the past bitterness with India, adding that Narendra Modi had been elected by the Indian people and we respect their decision.

About the Pakistan Tehreek-e-Insaf Chairman Imran Khan’s protest call against rigging in the last general elections, he said bringing some people on the streets did not mean a protest. He said the Election Commission of Pakistan had already rejected Imran’s objections of rigging in Sargodha.

He said the government would hold a dialogue with those who wanted peace and the elements disturbing peace would be dealt with strictly.

APP adds: Pervaiz Rashid said talks with the Taliban had not ended yet, adding that few people did not want talks.

He said Pakistan could not ignore changes in its neighbourhood as it would have to deal with the new government of India, adding the elected people would formulate foreign policies for the next five years.

The minister said: “Pakistan is responsible for its deeds and India for its own and we should keep our deeds correct.”

The minister said it was unfortunate that big media houses had given ‘scissors’ in the hands of cable operators, adding cable operators could not be allowed to violate the law. “It is good news that cable operators are reverting,” he added.

The minister said Pemra had initiated action and hoped that cable operators would do their own job and let the authorities do theirs.

“People want a completion of the journey to success and prosperity and they have brought Prime Minister Nawaz Sharif to the government for it,” he added. He said no one could derail the government as such attempts remained unsuccessful in the past by some people, adding, statements of PTI Chairman Imran Khan should be ignored. “How could he criticise us when he was unable to run the KP government properly?” he added.

To a question about the transfer of the CCPO Karachi, he said Shahid Hayat was a good officer who had maintained law and order in the city and Sindh ministers had appreciated his role and it would have been better if he had remained the CCPO.