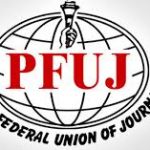 ISLAMABAD: Pakistan Federal Union of Journalists (PFUJ) has expressed its concern and dismay over the Punjab police incompetence to hold an inquiry into the burglary incident that occurred at the residence of veteran journalist Imtiaz Alam and demanded of the government to hold a judicial inquiry to probe the incident.

According to a press release PFUJ President Shahzada Zulfikar and Secretary General Nasir Zaidi expressed their concern in a press statement issued in Islamabad on Saturday. The two leaders said that the burglary incident, which took place when Imtiaz Alam was away from the country, apparently was an attempt to harass the family of the journalist during his absence abroad.

“The incident apparently had all the ingredients used by the government to harass the independent journalists in the country,” the statement said. “Perhaps the police are also aware of that and that is why they have not moved so far to investigate it seriously.”

The PFUJ president and secretary general said that the PFUJ is concerned that a systematic campaign is being carried out to silence free media and considers burglary attempt at the residence of Imtiaz Alam a link of the same chain.

While expressing its no confidence over the Punjab Police, the PFUJ leaders demanded of the government to set up a judicial inquiry to probe this incident. “The PFUJ calls upon the Punjab Chief Minister to hold a judicial inquiry into the incident so that the culprits could be brought to books,” the statement said.