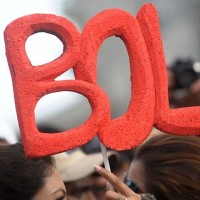 ISLAMABAD: The Pak­istan Electronic Media Reg­ulatory Authority (Pemra) ordered the management of Bol Television on Thursday to stop their transmission until the directors of their parent company Axact were exonerated from charges of fraud and money laundering.

Axact’s directors are currently facing charges in the wake of a massive fake degree scandal, which was exposed by The New York Times.

A spokesman for the electronic media watchdog told Dawn that the Bol management had been told that until the investigation into this matter was concluded and the directors of Axact were proven innocent, they could not air their channel’s transmission.

The management of Bol TV had announced the first of Ramazan as the formal launch date for their channel and a test transmission had begun a few days ago.

According to the Pemra spokesman, the authority asked Bol TV to cease transmission in pursuance of the letter, issued by the Ministry of Information and Broa­dcasting earlier on Thursday.

The information ministry had issued directions to Pemra to stop the transmission of Bol TV. The letter, titled ‘Policy advice under Section 5 of the Pemra Act 2007’, directed the authority to “ensure stoppage of transmission of Bol channel through any distribution network for the time being (sic).”

The letter further says that the directors of Axact are about to launch the Bol TV channel, and that since the matter is under investigation by the Federal Investigation Agency, letting the channel go on air may seriously hamper the investigation.