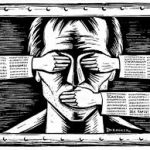 Sukkur: Rejecting curbs on freedom of expression and independence of speech, PPP Chairman Bilawal Bhutto Zardari said they are committed to upholding these basic human rights and will fully support and defend journalists against government censorship.

Addressing the media at Sukkur Press Club on Thursday, he said the media fought against dictators generals Ayub, Ziaul Haq and Musharraf. The PPP chairman said the journalists exposed the conspiracies hatched against her assassinated mother Benazir Bhutto and those against him.

He said the PTI government is muzzling the independent and democratic media to suppress their voice and through such tactics, the government wanted to hide its decisive failure in all spheres of policy and governance. He said the time has come to launch a collective protest against the ‘selected’ government. He asked when everybody could be given air time, including traitors, terrorists why the interview of ex-president of Asif Zardari was not allowed to be broadcast.

Talking about the video of an accountability judge leaked by PML-N Maryam Nawaz Sharif, he said the superior judiciary must take notice of the issue. Criticising the economic policies of the PTI government, Bilawal said the government passed the budget through rigging. Terming it an IMF policy document, he said it has unleashed heavy inflation and massive taxation against the poor whereas the elite segments have been given amnesty.

He said the PPP will back the decision of the opposition’s Rehbar Committee over the nomination of the Senate chairman. Bilawal said the incumbent Chairman Sadiq Sanjrani has lost the trust of the majority and should have resigned on his own. He warned the government against rigging the vote of confidence against the chairman.

Earlier, addressing a ceremony of the Sindh Rural Support Organisation, the PPP Chairman Bilawal Bhutto Zardari said the Peoples Poverty Reduction Programme will be implemented to bring prosperity to the lives of poor families specially women. He said Prime Minister Imran Khan has tried to abolish the Benazir Income Support Programme and launched the Ehsas Programme, but the government lacks any compassion for the common man, the poor, women and labourers. He said the BISP had empowered women across the country. He said the Sindh Rural Support Organization (SRSO) is executing Peoples Poverty Reduction programme which was appreciated by the European Union. He pledged to expand the Peoples Poverty Reduction programme to Gilgit Baltistan as well.

He said the EU has decided to increase the funding of the project. Bilawal said the SRSO economically strengthened one million families and provided interest free loan to 180,000 women and established 50,000 houses besides providing them opportunities for skill development. He said the Sindh government in its budget allocated funds for empowerment of women.

Earlier, women shared their success stories during the community conference. Bilawal visited their stalls and exchanged views with them. Bilawal distributed 90 laptops among women members of the local support organizations and cheques under community investment fund. Bilawal also expressed condolences over the tragic loss of lives in Sadiqabad train crash.