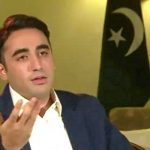 Islamabad: Pakistan People’s Party (PPP) Chairman Bilawal Bhutto Zardari has said that the opposition was facing ‘censorship’ in the Parliament.

Addressing the National Assembly, Bilawal said constructive criticism was important for every democracy, however, our opposition is facing ‘censorship’ in the parliament.

“Ban on the use of word ‘selected’ is the worst censorship in history”, Bilawal said referring to the directives of National Assembly (NA) Deputy Speaker Qasim Khan Suri on Sunday who banned the members from calling Prime Minister ‘selected’ in the House.

The PPP chairman said “There is no freedom for anyone in ‘Naya Pakistan’. Neither people, politics nor journalism is independent. ‘Naya Pakistan’ is a ‘censored Pakistan’ which is not acceptable for us.”

“We sacrificed immensely for the supremacy of this House,” he added.

He went on to say “We neither accept censorship on media nor on politics. Not issuing production order of National Assembly members is also censorship.”

Bilawal said the Prime Minister has to lead the nation but right now he is acting like a ruler not a leader.

“An average Pakistani is paying the price of this government’s incompetency due to increased levels of taxes”, he said and urged the government to take back their anti-people budget.

The News: Opposition to move SC against media censorship