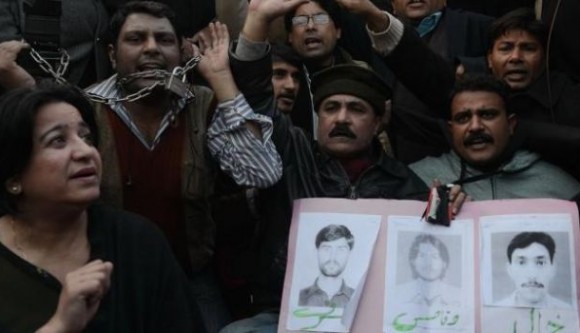 Karachi: Asharq Al-Awsat—Fears are growing among Pakistan’s journalists following a recent spate of killings and death threats against media workers in the country that have been linked to the Pakistani Taliban.

In response, some journalists have hired bodyguards to accompany them at work, while others have asked their families to leave the country.

Perceptions of danger have grown during the past year, as journalists have received an increasing number of threatening phone calls, text messages and other threats from Taliban spokesmen.

Senior Pakistani journalists interviewed by Asharq Al-Awsat said that the seriousness of the threat was brought home in mid-January, when three staffers from a leading media group were killed in a Taliban attack in Karachi. Gunmen riding on motorcycles shot dead three Express News workers after ambushing one of the channel’s vans while it was parked in the city. The Pakistani Taliban—the Tehrik-e-Taliban—claimed responsibility for the attack in a live telephone call from Afghanistan to Express News anchor Javed Chaudhry.

“We accept responsibility. I would like to present some of its reasons: At present, the Pakistani media is playing the role of [spreading] venomous propaganda against the Tehrik-e-Taliban. They have assumed the [role of] opposition. We had intimated the media earlier and warn it once again that [they must] side with us in this venomous propaganda,” Tehrik-e-Taliban spokesman Ehsanullah Ehsan told Express News.

This attack changed everything for Pakistani media workers. Suddenly the threats which journalists had been receiving from unknown sources via telephone calls and through text messages, with callers usually identifying themselves as Taliban, assumed an even more sinister dimension.

Several journalists told Asharq Al-Awsat that following the attacks, several senior journalists and owners of media outlets have sent their families out of the country.

Asharq Al-Awsat interviewed a s senior Pakistani journalist about the issue. Seated in his office at a distance from its large windows, a small precaution against a potential bomb blasts or sniper bullets, he said that the Tehrik-e-Taliban had access to accurate intelligence about journalists and the organizations they work for.

“The threats the Taliban are issuing are not meant only for the high profile figures of Pakistan’s media. A number of [junior] reporters have also received these threats from the Taliban,” said the journalist, on condition of anonymity.

He continued: “It’s not just us, the faces on TV. They know the personal numbers of in-house employees, and people in charge of different newsdesks and bureaus, the people no one outside the organization or a small circle would know about. Who is giving them these numbers?”

There are now reports in the media that the Taliban are planning to attack high-profile members of the Pakistani media in order to make a bigger impact, such as a TV anchor or the editor of a national newspaper.

“The initial hit-list prepared by the Tehrik-e-Taliban names nearly two dozen journalists and publishers. It includes the names of a number of media-group owners, the news heads of various television channels, prominent anchors, the editor of a leading English-language newspaper and even some field staff,” Hassan Abdullah writes in one of his most recent reports.

These threats to the media were recently underlined when the Taliban’s spokesman launched a diatribe against the media in one of his videos messages, released in December.

“But later on it was decided that the media was basically the institution driving this war and public opinion. When it is already defaming us, we really don’t have much to lose and may as well deal with the media as a party to this war,” he said.

“Even at this stage the media could mend its ways and become a neutral entity,” asserted Ehsan. “Otherwise, the media should not feel secure. A few barriers and security escorts will not help. If we can get inside military installations, media offices should not be too much of a challenge.”

The Taliban threat to the media has assumed a more sinister cast at a time when the Pakistani government is planning to initiate dialogue with the militant organization. Prime Minister Nawaz Sharif has announced the formation of a four-member committee to hold talks with Taliban. Two members of this committee are prominent journalists Rahimullah Yusufzai and Irfan Siddiqui.

After a recent meeting of negotiators between the government and the Tehrik-e-Taliban, both sides said that “there should be no activity by either side which can potentially harm the peace efforts.” Today, journalists in Pakistan wonder if this includes attacks on them.