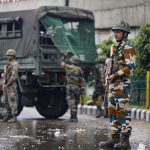 LONDON: The BBC said on Thursday it would expand shortwave radio news coverage in Occupied Kashmir to ease the impact of a communications blackout imposed by the Indian government.

The British broadcaster’s announcement came after New Delhi scrapped an article of the Indian constitution granting special status to parts of the disputed Himalayan region under its control.

Jammu and Kashmir has been under lockdown since the day before Indian Prime Minister Narendra Modi announced the change on Aug 5.

The BBC said the number and length of programmes would grow in a variety of languages spoken in the densely populated region of India-held Kashmir.

“Given the shutdown of digital services and phone lines in the region, it’s right for us to try and increase the provision of news on our shortwave radio services,” BBC World Service Director Jamie Angus said in a statement.

“The provision of independent and trusted news in places of conflict and tension is one of the core purposes of the World Service.”

The BBC said its News Hindi radio output would be extended by 30 minutes from Friday.

News Urdu — the official language of Pakistan spoken by Muslims who comprise the majority in Occupied Kashmir — will launch a 15-minute daily programme on Monday.

The World Service added that its English morning broadcasts would end an hour later than usual. The evening English-language news would start an hour earlier and end at their usual time.

The BBC said India is now its radio service’s largest market — picked up by 50 million people a week.

Shortwave transmissions travel thousands of kilometres and are able to bounce over mountains that dominate the disputed region.

Indian troops, meanwhile, detained a Kashmiri reporter working for a local newspaper in an overnight raid at his house in the Tral area of Southern Pulwama district.

According to his family, it was not clear why he was detained.

“The troops jumped over the compound wall of our house last night at around 11:30pm,” said Malik’s father, Mohammad Amin Malik, 57.

“We were asleep, they knocked at the door. We opened the door and troops asked for Irfan. He was taken along. We asked for reasons behind his arrest, they decline to say anything,” he said.

A spokesman for the Jammu and Kashmir government, Rohit Kansal, said he would seek information about the arrest.

“I just heard about the incident. We are trying to verify it,” he said.

More than 500 local leaders and activists have been detained in the past 12 days of the Indian crackdown.