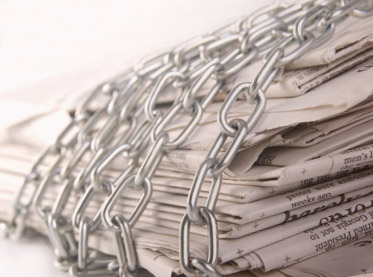 LAHORE: The restrictions on the distribution of daily Jang and The News in the Defence Housing Authority (DHA) of Lahore cantonment area has been challenged in the Lahore High Court.

An application in this regard was filed on Tuesday by Tahir Naeem, Advocate, a resident of DHA Phase-V, under Article 199 of the Constitution. The applicant made the defence and interior ministries, Defence News Agency, and the FIA director general respondents in his application.

The applicant stated that he had been receiving daily Jang and The News International at his residence regularly till April 24, 2014. However, from April 24, the Defence News Agency started delivering another newspaper at his residence instead of daily Jang without any instructions from him.

The petitioner said that on his inquiry, he came to know that an intelligence agency, working under the defence and interior ministries, had banned the distribution of daily Jang in the Cantt and DHA areas.

The application said that the action by the news agency on orders from the defence and interior ministries violated his basic human rights. He stated that legally, he could not be barred from reading any legally-published newspaper and deprived of his rights.

The application seeks a court order to the FIA to investigate the incident of imposing restrictions on the distribution of daily Jang in the DHA area on April 25-26. It also seeks a court direction to the defence and interior ministries to direct its intelligence agency to deal with its legal matters in the courts and restrain from any illegal activities like imposition of a ban on the distribution of newspapers and forced disappearance of people.