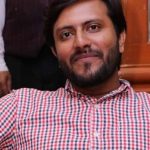 LAHORE: A judicial magistrate on Thursday denied bail to journalist Azharul Haq, who has been accused of making ‘anti-state’ remarks and criticising former military strongman General (r) Pervez Musharraf on the social media.

The Constitution allows freedom of expression, he said, adding that the journalist has just been arrested to spread fear among members of the media.

The FIA, on the other hand, presented evidence against the journalist.

On January 17, Haq was remanded into the FIA custody for defaming state institutions.

An FIR has been registered against Wahid under sections 11 (hate speech) and 20 (harming the reputation or privacy of a natural person) of the Prevention of Electronic Crime Act 2016, and Section 505 (statements conducing to public mischief) of the Pakistan Penal Code.

A person can be imprisoned for up to seven years or fined under Section 11. Section 20 is punishable by a jail term of three and/or a fine of Rs1 million, while the maximum sentence under Section 505 is seven years.