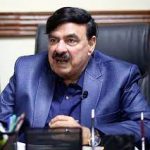 ISLAMABAD: Interior Minister Sheikh Rashid Ahmed on Tuesday said the authorities were close to tracking down one of the suspects responsible for physically assaulting journalist Asad Ali Toor in the federal capital last week.

He said the National Database and Registration Authority (Nadra), Federal Investigation Agency (FIA) and police were conducting an inquiry into the incident.

“The fingerprints will be identified in a day or two,” he said, adding that ads would be published in the newspapers if the authorities could not trace the suspects. The minister said the receptionist at Mr Toor’s apartment building had claimed that he did not stop the culprits because they had visited the journalist in the past.

“I have called the IG, Nadra and FIA […] we are close to identifying one of the culprits,” he said, adding: “I think that if we are successful in reaching these culprits, all those who blame our agencies will be silenced,” he said.

Rashid Ahmed said incidents involving attacks on journalists should be thoroughly investigated so that the culprits could be awarded appropriate punishment. He regretted that some individuals targeted the country’s security agencies to “appease their foreign masters”.

In response to a question, the minister said that Nadra was conducting an analysis of fingerprints and the results would be out soon.

“Otherwise, we will give ads in newspapers along with photos of the three suspects because some people are accusing our agencies under a specific agenda,” he said.

Asked about journalist Hamid Mir, who has been taken off air after making a fiery speech at a rally against repeated assaults on journalists in the country, Mr Ahmed said: “I haven’t interacted with him over the past few years, nor have I ever been on his programme.”

Talking about his recent visit to Kuwait, the minister said it was a highly successful trip. He disclosed that 425 doctors would leave for Kuwait this week. The Kuwaiti prime minister had also expressed willingness to issue visas to the people associated with the construction industry, he added.

“Similarly, 30 per cent of the three million visas Saudi Arabia will be opening up will go to Pakistanis,” he said, adding that foreign remittances were a large part of the economy.

He said that only two parties remained in the PDM as the Pakistan People’s Party and Awami National Party had already left the opposition alliance. “It is completely defunct but everyone is playing it up on the media.”

Other Media reports: The Nation