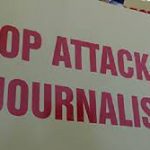 SHIKARPUR – The house of senior journalist Waheed Phulpoto was attacked by armed assailants belonging to Brohi tribe in the limits of Lakhi Gate police station here on Thursday.

According to police, the accused were identified as Asif Brohi and his accomplices, inhabitants of Ghari Yasin tehsil of Shikarpur. They ran away after harassing the family members of senior journalist.

Waheed Phulpoto, in his statement, claimed that Asif Brohi had been demanding extortion from him for two months but he refused. “Therefore, he attacked my house and threatened me with dire consequences,” he maintained.

He said that he had informed SSP Shikarpur Sajjad Ameer Sadozi, ASP Shikarpur Farooque Amjad, and the SHO concerned about attack on his house.