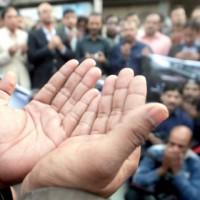 KARACHI: Journalists, political leaders and civil society activists stood united on Saturday against the attack in which three employees of Express News were killed, demanding the government to take stern action against those responsible for the deaths.

The media bodies asked provincial and federal governments to take appropriate measures for the safety and security of media persons, while the political leadership urged the federal government to convene an all parties conference (APC) on the ongoing security situation across the country.

The murder of Express News staffers and the third attack on the media group was strongly condemned. The journalists shouted slogans against the attackers and in favour of the struggle of journalists for the people of Pakistan.

“It is time to unite and it is time to stand together against those who want to silent the voice of journalists,” said PFUJ’s Amin Yousuf. He appealed to all media groups to highlight the issue whenever an employee of a media group is attacked. “We can’t defend ourselves if we can’t strive collectively.” He said that the first journalist in Pakistan was killed in 1965, adding that about at least 150 media persons have been killed after that.

“We demand the interior minister, Sindh chief minister and top officials to look into the matter immediately,” demanded KUJ’s President GM Jamali, asking the government to provide security to journalists as well as the public.

“Media personnel raise their voice for the oppressed people. They highlight the real issues in society and they have been under attack for years. Our party will raise the issues of media persons at all forums,” pledged PTI’s Qureshi.

“It is time to take action against those who want to spread fear among people,” said MQM’s Jalil, demanding the federal government convene an APC immediately on the issue. He also appealed to the army to come forward and take action.

His demand was backed by PPP’s Patel, who said, “The entire country needs to stand up to these attackers. Political will is required for appropriate action.”

While condemning the recent attack on the Express News staffers, the speakers shared concerns that all media groups were at risk.

All of Sindh condemns

The journalist fraternity in Sukkur and districts of Hyderabad and Mirpurkhas divisions held protests on Saturday to condemn the attack on the Express News team. In Hyderabad, Express News Bureau Chief Junaid Khanzada led a protest outside the press club. The protesters called for immediate arrest of the killers and protection to the journalists. Protest demonstrations were also taken out by the press clubs in Sanghar, Thatta, Badin, Matiari, Tando Allahyar, Mirpurkhas, Umerkot, Benazirabad and other districts.

The attacks were also condemned by political and religious parties. Sindh Taraqi Pasand Chairperson Dr Qadir Magsi said the enemies of journalism have been continuously trying to stifle the voice of truth but they have failed. “But such attacks can never achieve their objective of repressing the voice of truth.”

Condemning the attack, Qaumi Awami Tehreek’s leader asked the provincial government to expose the perpetrators who have been repeatedly attacking the Express News for last several months.

A big demonstration and sit in was organised by the Sukkur Union of Journalists at the clock tower roundabout on Saturday. Leaders of political, social and religious parties besides large number of citizens participated in the protest.

A large number of journalists along with the leaders of political, social and religious parties carrying banners and placards, led by the Sukkur Union of Journalists President Imran Sahil, Secretary General Perwaiz Khan and others, gathered at clock tower roundabout, while shouting slogans against the brutal murder of three employees of Express media.

The protesters termed the attack as weakness of the government, which, according to them, had failed to maintain law and order.

The participants also offered fateha for the departed souls. Similar protests were also organised in other parts of upper Sindh.