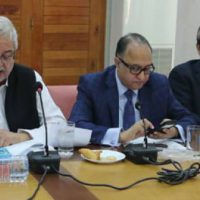 KARACHI  –   The All Pakistan Newspaers Society (APNS) has taken exception to the advertisement distribution policy of Federal Government as major part of advertising is being allocated to dummy and ghost publications in contrast to the claims of transparent and judicious allocation of government advertising by the Ministry of Information.

Sarmad Ali, Secretary General, APNS, has stated that the Executive Committee of the APNS at its meeting held under the chairmanship of its President, Hameed Haroon at Karachi, expressed its strong concern over the devastating effects of the government advertising policy. The members gathered from across the country, noted that the regional quota is being grossly misused as PID is making additions from the regional quota to metropolitan publications thus, depriving the regional press of its due share in the Federal Government advertising.

The members also noted that the same policy of denying advertisements to smaller and medium sized genuine newspapers is being pursued by the Punjab Government as well. This situation has exacerbated the financial crunch being faced by the newspaper industry due to increase in the newsprint prices, depreciation of Pak rupee and non-payment of media dues by the Federal and provincial governments.

The APNS Executive Committee considered the Media Policy of the Federal Government and opined that if the Policy is implemented in its present form, it would ruin the media industry. The members were of the considered opinion that the desire of the Information Ministry to control the flow of information including centralization of advertising would reflect badly upon the right of people to know as enshrined in the Article 19 and 19(a) of the Constitution. This policy would not only weaken the 4th pillar of the state but would also result in destabilizing the democratic dispensation in the country. The Executive Committee reiterated that a developed, vibrant, objective and viable media in the country is basic requirement of a stable and developing democracy in the society. The APNS urged upon the Federal Government to initiate a dialogue and consultation with the stakeholders on its media policy.