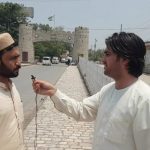 Some villagers threatened Mehrab Shah Afridi, a journalist from Khyber District, and attempted to attack him inside the Landi Kotal Press Club, causing anguish and indignation within the journalist community.

According to Mehrab, after the interview was aired, opponents of MPA Shafiq and activists of Federal Minister for Religious Affairs Noorul Haq Qadri criticized Shafiq Sher Afridi and also accused him of doing envelope journalism.

According to critics, Federal Minister for Religious Affairs Noor

Haq Qadri has placed street lights in Landikotal Bazaar and other development initiatives, while MPA Shafiq Sher Afridi is attempting to claim credit for these projects and programmes through envelope journalism.

This, they claim, does not end there, as these critics have begun to harass him in numerous ways, with some abusing him and others threatening to torture him.

According to him, Dr Rasim Shah Shinwari had also come to the Landi Kotal Press Club intending to attack him. However, he was on the upper floor at that time, thus the people on the ground floor sent him back and thus his life was spared.

On the other hand, Khyber Pakhtunkhwa journalists’ organizations have strongly condemned the threats made to Mehrab Shah Afridi by activists of Federal Religious Affairs Noor

“The Federal Minister for Religious Affairs is trying to construct his own kingdom in Khyber, the Prime Minister should take prompt notice of this,” journalist Rifatullah Orakzai said in a tweet. Since when did those who claimed to be building a ‘Riyasat.e.Madina’ begin to enslave people?

Shamim Shahid, a senior vice-president of the Federal Union of Journalists and a senior journalist, claims that since the PTI administration took control in the country, particularly in Khyber Pakhtunkhwa, the media has faced numerous impediments in carrying out their responsibilities. Journalists, on the other hand, are subjected to various forms of torture for pointing out the failures of the government.

They claimed that assaulting and intimidating a journalist was illegal. If the government does not respond quickly and take legal action against the intimidators, protests would erupt from Dera Ismail Khan to Chitral.

The situation of journalism in Pakistan

According to Pakistan’s senior journalist and analyst, Haq Nawaz Kitikhel, prosecuting or killing journalists for exposing government corruption and misconduct, intimidating them with violence and kidnapping is nothing new. But rest assured that no one’s voice can be silenced with such cheap tactics.

Haq Nawaz said that the accused of most of the affected journalists across the country have not yet received justice. If the process of punishment and retribution is made possible then the crimes against journalists can be reduced.

He said that agencies dedicated to the protection of journalists’ rights have rated Pakistan as the most hazardous country for journalists, citing the recent killing and injury of senior journalist and former PEMRA chairman Absar Alam by unknown individuals as an example.

“Shooting, killing, kidnapping, torturing, or filing false FIRs sends a message to other independent, constitutional, and democratic journalists to remain silent,” he says. “However, I don’t believe anyone can stop the flow of information, and the government is living in denial if it thinks so.”

Last year, Mehrab Shah Afridi was also threatened. The attack on Mehrab Afridi, a TNN correspondent, was condemned by journalists from throughout the country, including the Peshawar Press Club and the Khyber Union of Journalists