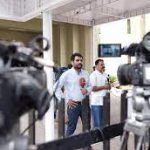 ISLAMABAD: Over 100 journalists from around the world have expressed their concerns over “an alarming surge in attacks on journalists in Pakistan” and urged the Pakistan Tehreek-i-Insaf (PTI) government to end impunity and take action against those who are attacking, harassing and intimidating journalists. The concern was shown by Harvard-educated journalists from across the world […]