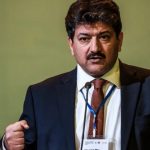 ISLAMABAD: Senior jour­nalist Hamid Mir has offered apology over his recent speech at a protest against attacks on journalists and said he had no intention to defame Pakistan Army. A joint statement issued by a committee formed by the Rawalpindi Islamabad Union of Journalists (RIUJ), the National Press Club and Mr Mir on Tuesday said […]