Home » Featured » Why Pakistan and India coming down on World Press Freedom Index? 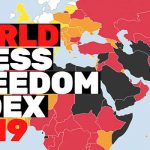 No one can kill a story by killing a journalist. Many slain journalists often became story of courage and bravery after their murder .Guillermo Cano is one of them. He was a Columbian Journalist who tried to expose the influence of drug mafia on the politics of his country. He was silenced by bullets in front of his newspaper office in 1986.His newspaper refused to bow down and followed the story started by Guillermo Cano. Three years later the office of his newspaper “El Espectador” was destroyed in a bomb attack in Bogota city of Columbia. Even then the story was not killed. United Nations Paris based agency UNESCO started “Guillermo Cano Press Freedom Award” annually in 1997.Every year a brave journalist receive this award on 3rd May (World Press Freedom Day) to continue the story of Guillermo Cano.

It is a fact that number of journalists killed in India and Pakistan declined in last two years. Then why both countries are losing their position on World Press Freedom Index? According to RSF sources “Yes the number of journalists killings declined but unannounced censorship increased in both India and Pakistan”. Media in both countries is a victim of intolerance by state and non-state actors. Recently Editors Guild of India condemned the incidents of abuse and intimidation of senior journalists in the run up of parliamentary election and urged the government to take necessary action against those who are involved in harassment through social media. Editors Guild of India also expressed concerns over the possible use of official secret act against those journalists who wrote investigative stories on Rafale deal.

On the other side, All Pakistan Newspapers Society (APNS) and Council of Pakistan Newspapers Editors (CPNE) released many statements in recent months to condemn the government’s move to replace media regulatory bodies with a new authority. Media Regulatory bodies in Pakistan are already in the control of state institutions. Powerful people can switch off any TV channel anywhere in Pakistan without any legal cover. It was also mentioned in a Supreme Court judgement written by Justice Qazi Faiz Essa.Pakistani parliament is failed to make legislation for the protection of journalists since 2011.A proposed draft for journalists protection bill was changed three times in last 8 years and not approved yet.

There is a famous saying that press and the nation rise and fall together. In fact media and democracy also rise and fall together. If India and Pakistan want to rise they must give freedom to the media promised in the constitutions of both countries. Media should not be pressurized to spread fake news in the name of national interest. Fake news cannot protect the sovereignty of any country. Poor journalism will make poor democracy.

Take the example of bombing by Indian Air Force (IAF) in Balakot area of KPK in February 2019.Indian state provided wrong information to media which was disputed by the Indian opposition. This “disinformation” embarrassed IAF.Another example. When Pakistani media broke the story that Prime Minister Imran Khan decided to change his Finance Minister Asad Umar then Information Minister Fawad Chaudhry contradicted that story in very strong words. We were told he issued contradiction on the instructions of PM.Even then many journalists including myself stood by our story. We insisted PM will change his Finance Minister. Pakistan Electronic Media Regulatory Authority (PEMRA) issued show because notices to some TV channels for spreading fake news but within few days both Asad Umar and Fawad Chaudhry were replaced.Credebility of media increased but reputation of government badly damaged and that’s why many governments don’t like media freedom.

No democratic government can survive by fighting media. If an anti-media government survives then democracy will ultimately die. Decline in media freedom will ultimately result in the deterioration of democratic values and weakening of democracy will strengthen the hands of extremists and terrorists. Today the biggest allegation used against media by state and non-state actors is “fake news”.In fact many journalists,TV channels and newspapers are victims of “fake news”because some interest groups have used fake social media accounts against regular media. Media must fight fake news to protect its freedom. The biggest strength of free media is the public support. No doubt that public always extend support for credible journalists and media houses. We must save our credibility by defeating fake news.US President Donald Trump tried to tarnish the credibility of media by repeating his narrative of “fake news media”. He made more than a thousand tweets against media since 2015. Washington Post Executive Editor Marty Baron declared Trump as a biggest threat to media freedom in US. Media outlets like Washington Post, New York Times and CNN are still surviving due to public support. Media can only protect its freedom by protecting its credibility. Fake news is the biggest enemy of media freedom today. We need to defeat fake news to honor the story of brave journalist Guillermo Cano who sacrificed his life in the line of duty like Daniel Pearl,Hayatullah Khan,Salim Shehzad,Gauri Lankesh,Shujaat Bukhari, Jamal Khashoggi and many others.No one can kill their stories.