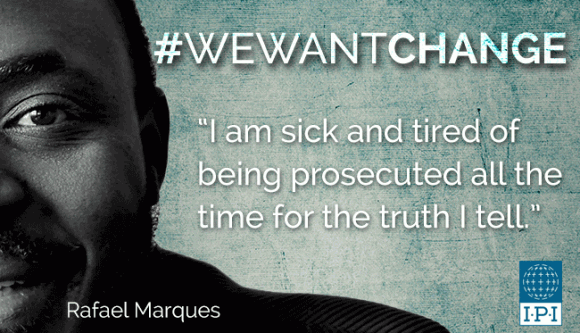 VIENNA, Oct 30, 2014 – Criminal defamation laws, the imprisonment of journalists, violent attacks on journalists, endemic impunity for such crimes and a spate of emerging restrictions on digital journalism are the five greatest challenges to press freedom around the world, the International Press Institute (IPI) said today as it launched its new campaign #WEWANTCHANGE.

The campaign will feature the stories of five journalists from four continents, sharing the details of their struggle to carry out their work despite tremendous obstacles created by the illegitimate use of laws and administrative restrictions, or by authorities’ failure to provide journalists with a safe working environment.

“I was arrested once, and convicted for defaming the president,” Angolan journalist and human rights activist Rafael Marques recounted in an interview with IPI that is featured in the campaign. “I was not allowed to present any evidence in court. And that is how I was convicted.”

Marques goes on to describe how criminal defamation laws impede journalistic work by inflicting disproportionate punishments and creating the infamous “chilling effect” on media, which stifles debate and fosters self-censorship.

IPI Press Freedom Manager Barbara Trionfi explained that “#WEWANTCHANGE draws on the powerful voices of journalists who have accompanied IPI for many years in its fight for press freedom and freedom of expression worldwide”.

She continued: “Their stories – the courage they have shown in the face of threats to their freedom and personal safety, supported by their passionate dedication to a journalism that pursues an important public function – show compelling evidence of how these obstacles to press freedom greatly hinder democratic practices.”

Trionfi also said that the campaign utilises IPI’s strength as a global organisation. “The collective voice of our members and friends around the world is the strongest tool IPI has to bring about better conditions for press freedom,” she added.

#WEWANTCHANGE launches today with the first two stories of the five to be featured: Angolan journalist and human rights activist Rafael Marques talks about his ongoing prosecution on criminal defamation charges and Al Jazeera reporter Abdullah Elshamy shares the story of his recent imprisonment in Egypt.

“The regime has shown, through these detentions and killing, that if you speak up against what happens, you either get detained for an endless time or you get killed,” Elshamy recounts in his interview. “But definitely [international] pressure works.”

Join IPI as we demand a safer world for journalism at campaigns.freemedia.at and www.freemedia.at. Share the information on the campaign website and raise your voice in support of media freedom worldwide.