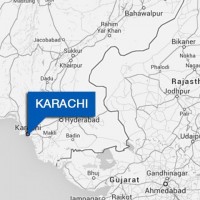 KARACHI: Men on a motorcycle opened fire at a digital satellite news-gathering (DSNG) van of Samaa TV in Liaquatabad area on Sunday.

A cameraman, a technician and the driver of the vehicle escaped unhurt but its rear window was smashed by a bullet.

According to Karachi-West Deputy Inspector General of Police Feroze Shah, the same weapon had been used in five recent incidents of targeted killing in the city, including an attack on a shrine in Korangi and the killing of a traffic policeman in Gulbai on Sept 2.

The DIG told Dawn that several shots had been fired and police found a shell of a 0.9mm pistol at the crime scene.

A pistol was also used in targeted killings of three members of the Shia community in Mominabad and Pirabad area earlier this year.

The police official said the attack on media persons appeared to be aimed at destabilising the city’s security situation.

He said he had formed a police team to identify and attackers in five days and ascertain their motive.