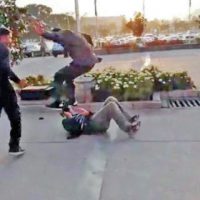 As he was leaving the Parliament House, journalists and cameramen rushed towards him.

When the cameraman of Samaa TV, Syed Wajid Ali, approached Mr Sharif, one of the security guards pushed him so violently that he fell on the ground.

Another guard then ran towards him and jumped on the head of the fallen cameraman. Journalists present at the scene then rushed towards the injured cameraman who had fallen unconscious.

The two security guards tried to board a vehicle of Mr Sharif’s motorcade but the journalists caught them. In the meantime, Mr Sharif’s cavalcade left the premises. National Assembly speaker orders registration of case against security guards

Other people present at the scene got the guards freed but later one of them was captured again and handed over to the sergeant-at-arms of the Parliament House while the other managed to escape.

The cameraman was taken to Polyclinic from where he was referred to Pims and kept under observation.

In protest, mediapersons closed the main gate of the Parliament House and stopped lawmakers from entering the building. They demanded legal action against the security guards.

Secretariat Police Station House Officer (SHO) Inspector Asjad Mehmood told Dawn that a medico-legal certificate of the injured had been sought from the hospital.

“He is being examined by doctors who would issue the certificate after which the case would be registered against the security guards,” he added.

One of the security guards is in the custody of the sergeant-at-arms in the Parliament House and would soon be taken into custody for further legal action, he added.

“The guards of Mr Sharif attacked and injured the cameraman when the latter was performing duty and tried to make a video of his departure from the Parliament House,” the SHO added.

When contacted, Samaa’s Bureau Chief Khalid Azeem said the cameraman was making footage of Mr Sharif’s departure when the security guards assaulted him.

“He was performing his duty which is neither a security breach nor privacy breach,” he added.

It is the fourth incident in which the PML-N leader targeted the staff of Samaa TV, Mr Azeem said, adding: “It seems to be preplanned. We air factual news and if anyone has objection over it he should rectify himself,” he added.

Opposition Leader in the National Assembly and PML-N President Shahbaz Sharif, while speaking on the floor of the house, tendered apology to the cameraman.

He also assured the house that he and his party would not come in the way of the legal course of action.

In a statement issued by PML-N, Nawaz Sharif condemned the incident.

“As soon as I came to know about the incident I directed my party leaders to take the cameraman to hospital and make arrangements for his treatment,” Mr Sharif said.

He said he and his party had immense respect for all journalists, camerapersons and photographers.

“I will not tolerate any individual in my staff who is found guilty of mistreating a person in such a way. We will ensure that this sort of regrettable, condemnable incident never happens in future.”

In a statement, she said Mr Sharif had taken strict notice of the incident and the security guard would be punished.

Ms Aurangzeb said Mr Sharif had personally asked her to supervise the treatment of the injured.