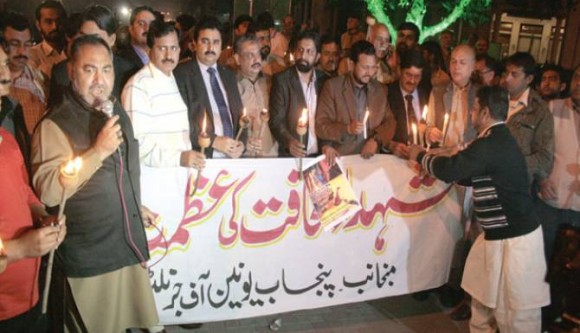 The community held seminars, rallies and ceremonies in their cities and districts to pay the rich tributes to all those journalists who were killed in the line of duty, in Pakistan and around the world.

Addressing with rally, PFUJ President Rana Azeem announced to give 10-marlas plots to the martyred journalists. The PFUJ president also announced to form a special fund of Rs10 million for the journalists who have been terminated from the jobs and for educational expenditure of children of the low paid journalists.

He paid rich tribute to the martyred journalists and said their sacrifices would be remembered always.

Minister for Ports and Shipping Kamran Machael said the journalists became the voice of the desperate people of the society. He announced to give bullet proofs jackets to the journalists. In Islamabad, PFUJ organised a seminar on Tuesday to pay tributes to the journalists who were killed in the line of duty in the country and all over the world.

Former Federal Minister Qamar Zaman Kaira as a chief guest on the occasion said that the journalist community has always remained on the forefront of all the movements in the country including freedom movement and the movement for restoration of democracy.

He said that in the present testing times when the whole nation is fighting the menace of terrorism, the journalists have set a noble example by giving great sacrifices while exposing the real designs of the evil forces.

He congratulated the PFUJ and other journalist organizations for organizing the seminar in memory of their martyred companions. Addressing the participants, President Pakistan Federal Union of Journalists (PFUJ) Afzal Butt said that journalists will always remember those members who embraced martyrdom.

“We have also appealed to the international journalist bodies to show solidarity with the victims and their families”, he added. He further added that by observing November 19 as the day for martyred journalists, PFUJ will try to draw world’s attention towards the threats being faced by Pakistani journalists.

Journalists from Rawalpindi and Islamabad, civil society members, representatives of different political parties and people from different walks of life attended the event.

In Karachi, the journalists, members of civil society and political workers also lit the lamps and candles in a ceremony to pay rich tributes to all those journalists who were killed in the line of duty, in Pakistan and around the world. Addressing with the ceremony, Senior Minister of Sindh Nisar Khorro said no one could ignore the sacrifices of the journalists who lost their lives during the duty hours.

“Pakistan Peoples Party pays rich tributes to all martyred journalists of Pakistan,” said the senior minister, adding the efforts and struggle of the journalists in restoration of the democracy in the county were appreciating.