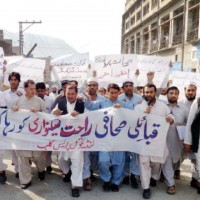 LANDI KOTAL: A vociferous protest by members of Landi Kotal Press Club compelled the security forces to release a local journalist, who was apprehended on Saturday evening.

Rahat Shinwari, correspondent of an Urdu daily, was picked up by armed personnel of Khyber Rifles from his house after his identification by a ‘masked’ man accompanying the raiding party.

His family members were made hostage till he was whisked away by the personnel of Khyber Rifles.

The family members of the arrested journalist later told reporters that they were not given any reason by the security forces for Rahat’s arrest.

The members of Landi Kotal Press Club organised a protest demonstration at the bazaar on Sunday after they failed to get a satisfactory explanation about the arrest and whereabouts of the arrested colleague from both the local political administration and Khyber Rifles.

Rahat Shinwari was picked up by personnel of Khyber Rifles from his house
Addressing the protesting journalists, president of press club Ali Shinwari condemned the arrest of Rahat Shinwari and termed the incident uncalled for.

He said that local journalists had an understanding with both the security officials and local administration to mutually resolve issues if there was any concerning reporting from the region.

Mr Shinwari threatened to boycott all official events and expand the protest to Peshawar and Islamabad if the unlawful intimidation of journalists by the security forces was not halted forthwith.

It was only three hours after the protest by local journalists that Rahat Shinwari was released. Security officials, however, did not furnished any reason for his ‘less than 24 hours incarceration’.

The security forces had about six months ago arrested and released another local journalist Sudhir Ahmad in a similar fashion.

Meanwhile, two separate demonstrations were held in Landi Kotal on Sunday by activists of a political party and students of local educational institutions against excessive power loadshedding and Frontier Crimes Regulation.

The activists of Jamaat-i-Islami, led by Zar Noor Afridi, chanted slogans against Tribal Areas Electricity Supply Company and officials of local grid station and accused them of subjecting the residents of Landi Kotal to almost 20 hours power loadshedding.

The protesters also accused the local MNA and his brother senator for their failure to take up the issue of excessive and unscheduled loadshedding with the officials concerned.

The students of various educational institutions through their protest demanded of the federal government, Fata parliamentarians and leaders of mainstream political parties to abolish FCR.