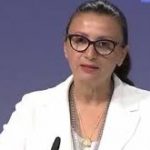 BRUSSELS: The European Union is concerned over the continued reported cases of violence, intimidation, abduction, and killing of journalists in Pakistan, EU spokesperson for Foreign Affairs and Security Policy Nabila Massrali said Tuesday.

There is a “clear, negative trend” in the freedom of media in recent years, Massrali said in a statement.

“The backtracking in this area is having a detrimental impact on the overall climate of freedom of expression in Pakistan and reflecting negatively on Pakistan’s image abroad,” the spokesperson said.

The EU is also concerned about widespread and systematic harassment online, especially of female journalists, through coordinated campaigns including abusive language and threats of violence, Massrali said.

The spokesperson said EU actively advocates importance of the freedom of expression and the need for protection of journalists around the world, including in Pakistan and directly with the Pakistani authorities.

“In the fifth EU-Pakistan Strategic Dialogue with Foreign Minister Qureshi on 3 November 2020, [High Representative of the Union for Foreign Affairs and Security Policy] Josep Borrell reiterated concerns over the freedom of expression and media in Pakistan,” Massrali said.

The EEAS has a regular dialogue on human rights with the Pakistani government, where the topics of freedom of expression and media are important points on the agenda, the spokesperson said.

We hope that Pakistan will agree as soon as possible on the date for this year’s meeting, Massrali said.

“The EU maintains close contact with journalists and media professionals in the country and supports local NGOs in advocacy and capacity building in their work to support freedom of expression and access to information,” she added.