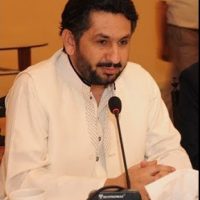 Saleem Safi, a prominent Pakistani journalist, columnist and anchorperson has been the target of abuse and harassment on social media after a comment he made former Prime Minister Nawaz Sharif.

In a TV show on August 19, Safi claimed that during his tenure as prime minister, Nawaz Sharif had borne the expenses of PM house from his own pocket.  The journalist also posted some pictures of Nawaz Sharif’s paid receipt bills from different events on Twitter. The cheques were also shown to the incumbent Prime Minister Imran Khan. However according to later reports, documents available online contradict Saleem Safi’s statement and show that taxpayers paid the expenditures of PM house not Nawaz Sharif.

Social media users especially supporters of ruling Pakistan Tehreek-i-Insaaf (PTI) party started a campaign against the journalist, trolling him for his claims.

On August 27, Peshawar Press Club and Khyber Union of Journalists also organized a protest demonstration against what they said was character assassination of Saleem Safi on social media.

While talking to the protestors, president of Khyber Union of Journalists, Saiful Islam Saifi said, “This is not the way to confront journalists for reporting facts. Journalists like Saleem Safi cannot be silenced through such tactics.”

While talking to PPF the Secretary General of Pakistan Federal Union Journalists (PFUJ), Ayub Jan Sirhandi condemned the ongoing social media campaign against Saleem Safi and assured that they will take a step in solidarity with journalist.