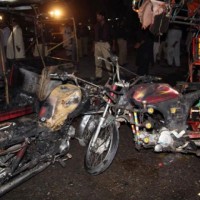 KOHAT: Television journalist Hafeezur Rehman was shot dead by unidentified people in Kalo Banda, Kohat on Sunday morning. He was the second journalist in Khyber-Pakhtunkhwa to lose his life in such a grizzly manner in 2015. A police official said Rehman was on his bike when he was targeted by the gunmen. “He was hit […]